What Not To Do

Or this post could be subtitled: "The Kitchen Sink School of Heraldry."  (Because it seems like the designers have tried to include everything, including the kitchen sink.)

Over the years I have acquired a lot of images of heraldry as used here in the United States and elsewhere.  Some of it is very good; a lot of it is fair; and some of it is, well, really bad.

One example that appears as an example of this last is the "arms" of the State of Alabama.  (Whose state motto is sometimes, jokingly, said to be, "At least we're not Mississippi.") 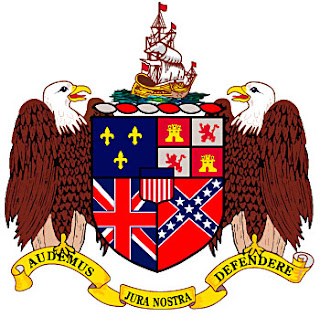 As you can see, it's a bit of a mash-up, consisting as it does of the arms or flags of the several nations which have claimed its territory over the past few centuries: France, Spain, Great Britain, the Confederate States of America, and the United States of America.  It could be blazoned "briefly," I suppose, as Quarterly, 1, France modern [Azure three fleurs-de-lys Or]; 2, Spain [Quarterly, 1 and 4, Gules a tower or castle Or (Castile), 2 and 3, Argent a lion rampant Gules (Leon)]; 3, the Union flag (1801 to present, for Great Britain); and 4, the battle flag of the Confederate States of America (Gules on a saltire Azure fimbriated 13 mullets Argent); overall, an inescutcheon Paly of thirteen Gules and Argent a chief Azure (which last is almost but not quite the arms of the United States, reversing as it does the red and white stripes).  Additionally, the use of the arms of the U.S. on an inescutcheon would seem to state that Alabama's progeny will inherit the United States, at least heraldically.
Another example of the same kitchen-sink school of heraldic design can be found in the arms of the City of Winchester, Virginia. 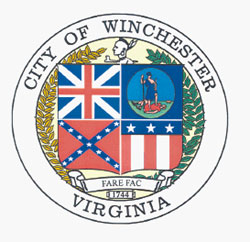 Here, too, we have flags and arms in a quarterly shield, this time the earlier version of the Union flag (1606-1801), the central image of an Amazon having slain Tyranny from the seal of the State of Virginia (http://en.wikipedia.org/wiki/Seal_of_virginia), the Confederate battle flag (without the fimbriation of the saltire), and yet another, different allusion to the arms of the United States, Gules two pallets Argent on a chief Azure three mullets Argent.  As noted above, the arms of the U.S. are Paly of thirteen Argent and Gules, a chief Azure (thirteen stripes, not five; white on the outer sides, not red; and no stars on the chief).