Canadian Heraldry in the News!


The Canadian city of Sault Ste. Marie turned 100 last year, and has decided as a part of that celebration to get itself a new coat of arms. 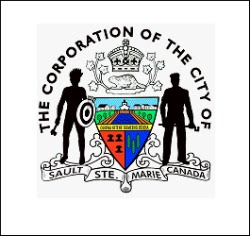 And why wouldn't you want to change their current "logo" above, after all?  (Wait, is that American Indian supporter really bearing a bulls-eye target on his shield?  Not to mention the unauthorized use of the Royal crown.  Oh, my.)

After talking about making such a change twice before, in 2003 and 2007, the City Council formed a Coat of Arms Committee which, in conjunction with the Canadian Heraldic Authority has been looking at ideas for a new design.  Some of what they've come up with includes: several elements which acknowledge Sault Ste. Marie's culture, history, geography and wildlife; the motto "Ojibwa Kitche Gumeeng Odena," identifying the community as a First Nations meeting place; the St. Marys River Rapids, the lock, depictions of whitefish and the fur trade, the steel and forestry industries, the Clergue Block House and Maple leaves.  (Hmm, is the new coat of arms going to be any better than the old "logo"?  Oh, dear, that's a lot of stuff to be throwing on and around the shield.)  The new coat of arms' colors will be blue (water), grey (steel) and gold.  All these recommendations (and a few others) were approved by Council at its July 15 meeting.

The full story of this upcoming change to the City's "branding," entitled "What's blue, grey and gold, costs about $5,000?" can be found on the website of SooToday.com at http://www.sootoday.com/content/news/details.asp?c=60245