Once Again Into The Breach, Dear Friends


In this case, the “breach” seems to be that Canberra, the Australian Capital Territory (ACT), does not have its own coat of arms. (The City of Canberra does, as noted in a recent post here: April 8, 2013, http://blog.appletonstudios.com/2013/08/australian-heraldry-in-news.html.) And there are some folks who want to change that. (Currently the ACT has a flag that uses the City of Canberra’s coat of arms and supporters on a yellow/gold fly with the Southern Cross constellation in white on a blue hoist.) The trouble is, as it always seems to be, what to put on the "new" shield?

In a recent article in The Canberra Times, the suggestion is made, as the title of the article suggests "Quest for a 'relevant' coat of arms"), that the new coat of arms should be "relevant." By this, Terry Fewtrell, one of those pushing for the new arms, means that Canberra should ditch its "outdated" coat of arms. "It’s a travesty that nothing in it reflects the real Canberra," he said. "It is neither Australian, nor reflective of the people and the place that we live in." 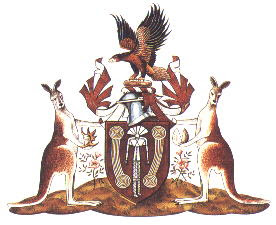 He points to the coat of arms of the Northern Territory, above, depicting Aboriginal motifs and local animals and flowers, saying heraldry need not be rooted in old-world imagery. (That last statement is something that I can agree with, though I'm not at all certain that I would go as far as he does and toss all of the "old world" imagery out, as he seems to want to do.) "You don’t have to be bound by all those old symbols – the castles and so on. You can be very creative." I can certainly agree with this, too, but again, I don't think you have to throw it all out and start from scratch. It is entirely possible to incorporate local elements (indeed, the Canadian Heraldic Authority does it all the time) without making the whole thing look like a paean to the indigenous peoples and ignoring the heraldic symbols and traditions that the European settlers, usually now in the majority, brought with them.

Another example of what some may consider to be swinging the pendulum too far from European heraldic tradition is the arms of South Africa, here.  I mean, it's a decent design overall, but what in there symbolizes the many people of European extraction (or Indian or southeast Asian, for that matter) who live there, too? 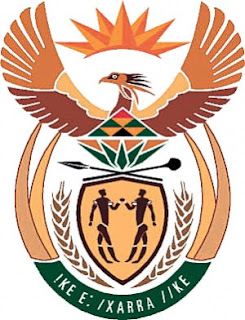 I just think that there's a happy medium, where the symbols of the local area have a place, but so do the emblems of the descendants of the (mostly) European immigrants. To do otherwise, to ignore either the one or the other in creating a coat of arms for such a place, seems to me to be trying to deny a part of the history of the area and its peoples. But what do I know?

Anyway, you can read the full article about the suggestions that some are making to create a new coat of arms for the ACT, along with comments reacting to the article (some of which are fairly amusing) on-line at http://www.canberratimes.com.au/act-news/quest-for-a-relevant-coat-of-arms-20130814-2rw2s.html#content