Taking a little time out from the international news of heraldry, I thought I'd introduce to you the coat of arms of the capitol city of Texas, Austin. 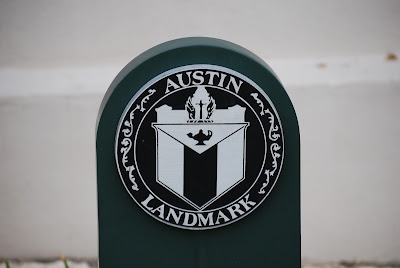 Named for the "Father of Texas" (so named because of his early efforts in the colonization of the area) Stephen F. Austin (1793-1836), the City of Austin is not only home to the State's government (the above example of Austin's coat of arms was photographed on the capitol building grounds; note the silhouette of the capitol building behind the crest above the shield), but also - in keeping with its self-description as a "City of Learning" - the University of Texas.

It is to commemorate the "City of Learning" that a lamp of knowledge appears on the chief of its arms.

The coat of arms was designed in 1915 by Ray F. Coyle of San Francisco. The winning entrant in a city-sponsored contest for a city flag, the crest incorporates the crest attributed to Stephen F. Austin, A cross-crosslet fitchy or between a pair of wings argent.