These arms the Nelsons bore in days of old:
A black cross flory on a shield of gold,
And over all a bendlet gules, to show
Due difference from Samson and Lamplow. 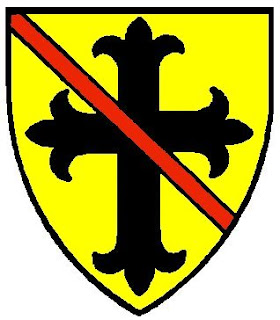 When one Horatio Nelson rose to fame,
With ‘Sir’ and ‘K.B.’ bracketing his name,
The Kings of Arms his scutcheon did resplend
With three exploding bombs upon the bend. 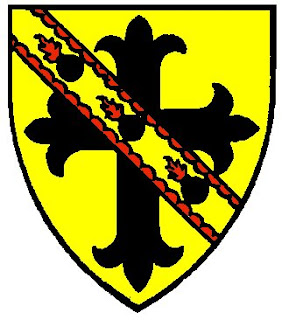 Later, they gave Lord Nelson of the Nile
An augmentation in a lavish style –
A ship disabled and a fort destroyed
(Which probably the Baron much enjoyed.) 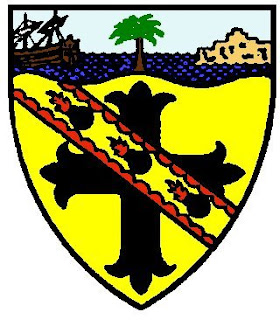 When Viscount Nelson of the Nile at last
Beyond the reach of earthly honours passed,
His brother (made an Earl), the heralds gave
The golden word TRAFALGAR on a wave. 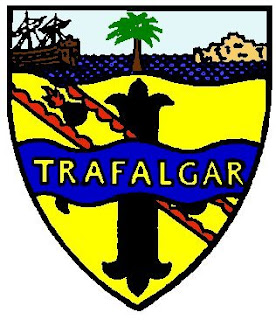 The shield is a fine biographic gloss,
But where, alas! is Nelson’s ancient cross?


And why is that bit of doggerel (albeit amusing) of any relevance at all?  Because for someone with the interest, and a fair bit of spare cash, it is possible right now to purchase a piece of silver in the form of a covered entree dish made for and with the armorial insignia of Lord Nelson of the Nile. 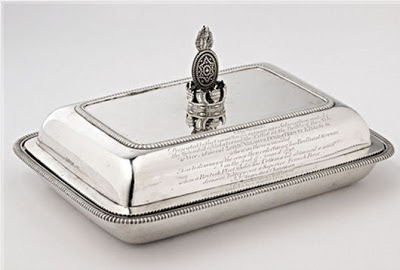 The dish is described as "a magnificent silver entree dish and cover, rectangular with gadroon edges, the domed cover engraved with a presentation inscription from Lloyds Coffee House on one side and Nelson's coat of arms on the other; with removable finial designed as the Chelengk crest of Admiral Lord Nelson. The dish cover additionally engraved inside with the crests of Admiral Lord Nelson."  The dish and cover are numbered No. 2 (of the original set of four). 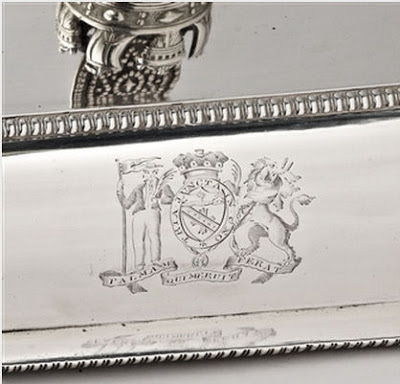 The inscription reads: "Lloyd's 1800. Presented by the Committee, for managing a Subscription made for the Wounded and Relatives of the Killed at the Battle of the Nile, To Vice Admiral Lord Nelson and Duke of Bronti [sic], K.B., &c, &c, &c, who was there wounded, As a testimony of the sense they entertain of his Brilliant Services on the first of August, 1798, when a British Fleet under his Command obtained a most decisive victory over a Superior French Force. J. J. Angerstein, Chairman" 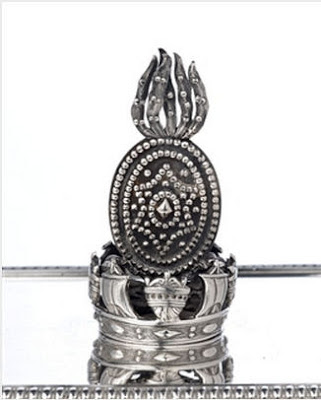 The handle of the cover is, as noted above, one of the crests of Admiral Lord Nelson, to wit: Issuant from a naval crown, a representation of the Chelengk (a fine large jewel designed as an aigrette of diamonds and a traditional award for bravery, rarely given to foreigners, which was given to Nelson by the Turkish sultan).

If you think you might be interested, either in seeing more images of or purchasing this unique piece of history, it is available for sale from Heraldic Silver, Ltd., and can be seen on-line on their myfamilysilver.com website at http://www.myfamilysilver.com/mp/item/20815/nelson-highly-important-and-historic-george-iii-armorial-silver-entree-dish-and-cover-presented-to-admiral-lord-nelson-by-lloyd-s-coffee-house-after-the-battle-of-the-nile  Or if you happen to be in the area (which, alas, I am not), the dish will be the highlight of their stand at the Fine Art & Antiques Fair, Olympia, London from 6 to 16 June.