Heraldry in the (Old) News

Well, it's not exactly breaking news; in fact, it goes all the way back to April 2011, nearly two years ago.  But a program that I use to search out news items and blog posts, etc. for things heraldic just found an old news story about the new coat of arms of the Middleton family, granted them by the College of Arms shortly before daughter Kate's marriage to William Windsor.

The article, entitled "Kate Middleton’s Coat of Arms: What Do Those Acorns Actually Mean?", asks a question we often see in heraldry, but which many times cannot be answered nearly so well as it is here.  That is because in this instance, Thomas Woodcock, who helped design the arms, could tell us what the various elements mean.  "Three acorns represent the three Middleton children (Kate, Pippa and James), and invoke the oak tree—a symbol of west Berkshire, where the family has lived for 30 years. The division down the middle of the crest is a play on the Middle-ton family name, while the gold chevron refers to Carole’s maiden name Goldsmith."

This sort of explanation is not often the case.  Many times, unless either the bearer or the designer (as in the case of the Middleton arms) left us notes explaining the meanings of the colors and charges on the shield, or unless the arms are a cant, or pun, on the name (e.g., the hand and chief with three roosters, or cocks, in the arms of Hancock, below), it is difficult to guess, much less know, why those colors or charges appear on the arms. 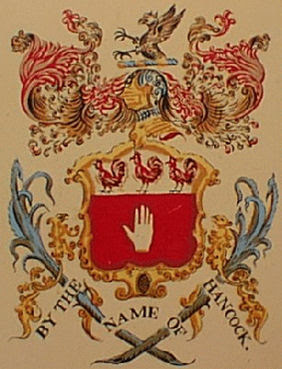 Yes, I know that there are websites and books that purport to tell you the meanings of the colors and charges, but in truth there are no generally accepted meanings for these things.  Indeed, different compilations of such meanings often disagree with each other, to the point of having one charge mean completely contradictory things!  And as Lowe in his Curiosities of Heraldry notes: “It does not seem to have occured to these allegorizing worthies that the tincture of a charge may be diametrically opposed to the signification assigned to the charge itself. For example, the coat ‘Vert, a bull's head or’ by the armilogical rules cited above, would signify, as to the tinctures, pleasure and joy, while as to the charge it would mean rage and fury. Again, ‘Purpure, a wolf argent’ would mean ‘a wrangler with a peacable disposition!!’”

A good discussion of the significance of the meanings of charges in heraldry can be found in the Most Frequently Asked Questions of the rec.heraldry newsgroup, available on line on Francois Velde's Heraldica at http://www.heraldica.org/faqs/mfaq

Anyway, although about an event not exactly current, it's a nice little article (well, except where they make the all too common error of calling a coat of arms a "crest") about some heraldry where we can actually learn the meanings of some of the colors and charges.  It can be found on-line at http://newsfeed.time.com/2011/04/25/kate-middletons-coat-of-arms-what-do-those-acorns-actually-mean/