The Gore Roll of Arms, Again


I like to talk about the Gore roll of arms every now and again, simply because it is my belief, based on many interactions with heraldry enthusiasts here in the United States and around the world, that far too few people even know of its existence, and of those that do, the majority are only aware of it through the most widely available, but flawed, source.

The Gore roll is a roll of arms which was created in the mid-1700s containing color reproductions of arms dating back to the early 1700s, created by the Gore family of sign and herald painters in colonial Boston, Massachusetts.  You can find the presentation I gave on the Gore roll at the International Congress of Genealogical and Heraldic Sciences held in Bruges, Belgium in 2004 at http://www.appletonstudios.com/Congress2004DBA.pdf  (The illustrations in that .pdf are black and white line drawings which I created, since the full-color illustrations from the Gore roll are held in copyright by the New England Historic Genealogical Society, which owns the roll.)  Still, you can get an idea of the roll from the photograph below, taken when I was able to visit the NEHGS and given a peek at the original. 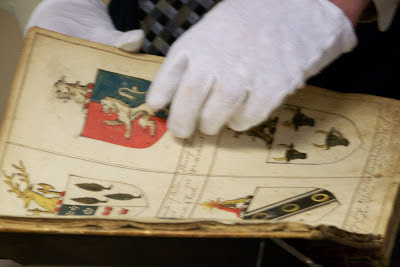 As I mention in the article noted above, most people get their knowledge of the Gore roll from the publications of William Whitmore in the mid-19th Century.  Unfortunately, there are errors at two levels in those publications, in that they (1) were done from an imperfect copy of the roll (to be fair to him, the original had disappeared at that time, and was only rediscovered in the 1930s) and not the original, and (2) Whitmore introduced some additional errors of his own.

When the original was rediscovered in the possession of some Gore family descendants, it was purchased from them by Dr. Harold Bowditch of the NEHGS, and remains in their holdings today.  Dr. Bowditch did a good review of the roll which was published in the The Rhode Island Register, the journal of the Rhode Island Historical Society.  The trouble, of course, is that copies of that review (or a later 1983 reprint) are hard to find except in the very best genealogical libraries.

In an effort to try to make information about this unique historical American roll of arms a little more widely available, I wrote a new volume about it and published it myself.  This most recent review of the Gore roll is the first to include illustrations of all of the arms contained in it, as well as containing Whitmore's and Dr. Bowditch's writings about it along with some additional information and illustrations of other usages of some of the arms in the roll.  (I would have included color reproductions of the arms, but the cost to obtain the necessary permissions would have meant that I would have had to at the very least double the price of the book, and it's already more expensive than I would like as it is.  So, black and white line drawings it is!)

If you'd like more information about this roll of arms beyond the .pdf article noted above, you can see more, including sample pages - and buy the book - at http://www.appletonstudios.com/BooksandGames.htm