"You can find heraldry (or heraldry-like logos) everywhere."

The last time we were visiting Chicago (a great town for architecture, as well as history, good food, and good friends), as we were driving around we spotted the following logos from the car. 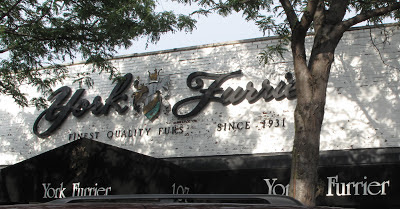 The first was the coat of arms on the facade of York Furrier. 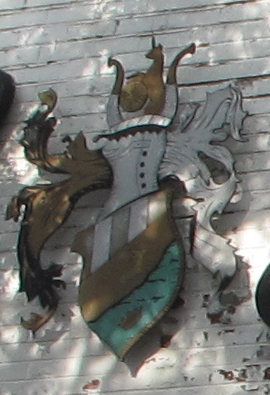 As you can see, it's a bit of a mash-up, with what almost looks more like a "sash sinister" than it does a bend sinister, a crown in base whose posture is probably best described as bendwise, an English esquire's helm with a crest of a rampant more-than-demi unicorn holding something between a pair of Germanic-style buffalo horns.

The other was very much an "arms-like logo" on the canopy over the door of Bath Crest. 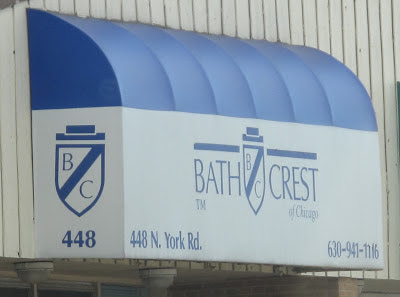 Here, the bend sinister is unambiguous, between the capital letters B and C.  On the other hand, I'm not at all certain what the thing above the shield, where one would normally expect a helm and crest (or sometimes just a crest) is supposed to be.  (In conjunction with the name, it reminds me of a toilet seat and lid edge on, but probably is just me.)

So as I said, you can find heraldry everywhere!  Even just driving down the streets of a major city in the American midwest.