There was a nice article recently in the pages of The Whig-Standard (through its on-line edition) about recent repairs to, and a history of, the large (8' x 5' with its wooden base, and weighing 400 pounds) embroidered coat of arms (though the paper incorrectly calls it a "crest") of Queen's University at Kingston in Kingston, Ontario, Canada.  For those of you interested in a history of the university, founded in 1841, you can see more, as well as another rendition of the university's arms, at http://en.wikipedia.org/wiki/Queen%27s_University 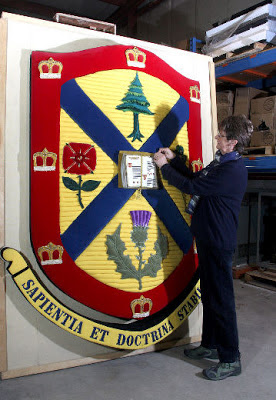 The creator of the embroidered coat, Carolyn Pickering, is shown above doing a little repair work on it.  She originally created it over the course of three months some 40 years ago as a dramatic centerpiece for some of the activities of the University, such as convocations.

The full story, and more details about the embroidered coat of arms, its history, and how many men it takes to move it, can be found on-line at http://www.thewhig.com/2013/04/28/queens-crest-heavy-on-history