One of the real treasures contained in the Treasury at Basilica of St. Servatius is a gilded bust, dating to 1580, containing a relic of the Saint's skull. 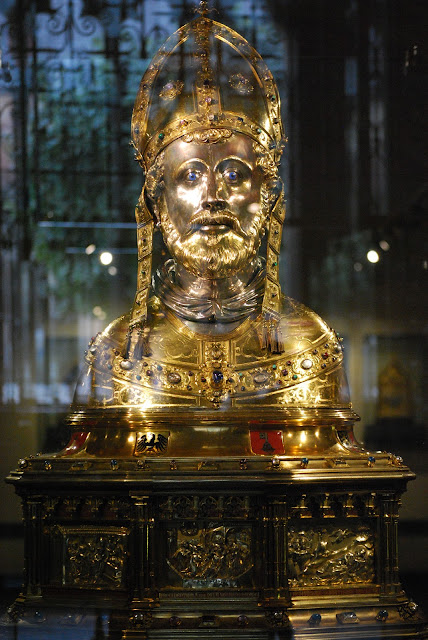 As you can see, it is a beautiful piece of work.  But, of course, the part that most attracted me was the enameled coats of arms encircling it between the bust of the saint and the casket the bust is mounted on.

This photo is taken of the back, and has the arms, from left to right, of Bavaria, arms which I have not had the time to research properly to determine which entity it represents (Argent a cross sable.  Do you have any idea how many plain crosses there are in European heraldry?  Or even just how many black crosses on white shields there are?  Lots!), another portion of the Province of Limburg (this shield appears in the second quarter of the modern arms of the Dutch Province of Limburg), and France.

Isn’t it a remarkable work?  And what great heraldry, too!