We interrupt our on-going series of heraldry in the city of Maastricht, The Netherlands, to share some heraldry we found in Tyler, out in east Texas.

I was there to give a presentation to the East Texas Genealogical Society ("An Introduction to Heraldry for Genealogists,", if you must know), and we arrived early enough to see a bit of the town and have lunch before going to the library for the presentation.  As we were driving around, we passed by this building ... 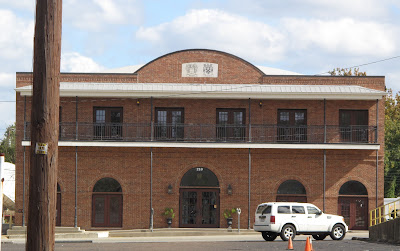 ... which boasts two coats of arms on its facade.

Here they are in close up. 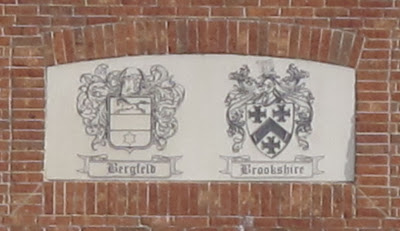 The two arms - Bergfeld and Brookshire - look suspiciously to me like they've come from one of the many bucket shop heralds available on the internet and at Gaelic and Scottish festivals just about everywhere.  You know, the folks who will gladly print you out a copy of "your family coat of arms" or worse, "your family crest," for US$20 or so (no matter that the arms they sell you may belong to another family entirely which only bears the same, or a similar, surname to yours).

Still, I tried doing a little research on these two coats, and was unable to come up with anything from any reputable source.  Neither shield appears in Burke's General Armory or in Rietstap's Armorial Général.  I tried a few other general American sources like Bolton's American Armory, Crozier's General Armory and Matthews' American Armory and Blue Book, but didn't run across either coat of arms in any book that I checked.

So I went on-line to see what I could find.  No real luck on this Bergfeld coat, though several firms offered different coats of arms for the name, a couple of them with horseshoes on them.

But several bucket shops all had this coat of arms for Brookshire: Argent, a chevron between three crosses moline gules.  Papworth's An Ordinary of British Armorials, however, cites this shield as belonging to "Bruckshaw or Bruckshow," as well as to Cheselden, Cheseldon or Cheseldyne, Chiseldine, and Chiselden.

Well, I guess that "Bruckshaw" sounds a bit like "Brookshire."  And that seems to be good enough for most bucket shops.