I was perusing once again through a book I'd bought a while back, Mr. Punch's Book of Arms by E.T. Reed, published in 1894.  For those of you familiar with Punch in England, you'll already have figured out that it is humor, or at least intended to be such.  (For others who may not be so familiar with Mr. Punch, one of the primary characters in Punch and Judy shows, please check out the article at http://en.wikipedia.org/wiki/Punch_and_Judy for more on the character.)  Punch was also a weekly humor magazine from 1841 to 1992, and this book certainly follows in that vein.

Before getting into a couple of the arms in it that really struck me, however, I thought I'd share with you the bookplate glued inside the front cover.  (The facing page now has one of my own bookplates on it.) 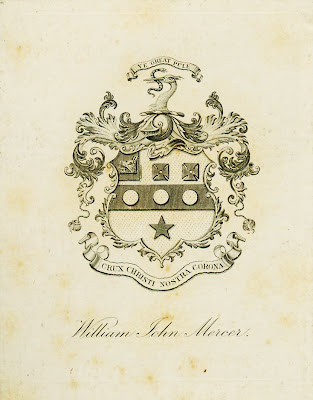 These are the arms of William John Mercer, which arms mark him as one of the Mercers of Huntingtower, county Perth, as noted in Burke's General Armory.  The arms are blazoned there as: Or on a fess between three crosses patty gules in chief and a mullet azure in base, as many [that is, three] bezants, a canton gules charged with a boar's head couped or.  Crest: The head and neck of a stork, holding in his beak a serpent writhing proper.  Mottoes (over the crest): Ye great pule [I'm uncertain as to the meaning.  The OED cites pule as "whine," as an obsolete term for "pillow," and as a Scottish variant of "pool;" but "the great pool" doesn't make a lot of sense to me as a motto.  Still, what do I know?  And the motto of one of the other Mercers in Burke is a similar "the grit pool"], (under the shield): Crux christi nostra corona (the cross of Christ is our crown).

I find it fascinating that the the torse, which originally hid the attachments that held the crest to the helm, has become here a thing unto itself, delicately balanced atop the helm and liable to blow off at the slightest breeze.
Posted by David B. Appleton at 6:00 AM