One of the fun things about owning a Kindle e-reader is that you can find not just books but entire collections of books for the thing, often very inexpensively.  In the case at hand, I had bought the entire works of Rudyard Kipling, and over the course of last summer and fall had read the entire set.  (Yes, I'd read bits and pieces of Kipling before, but this is the first time I'd had the opportunity to read all of his stories.  It was a fascinating read both for history and for going far beyond the Jungle Book, the Just-So Stories, and The Man Who Would Be King.)  Anyway, all that reading had helped to pay extra attention when I was recently thumbing through Mr. Punch's Book of Arms (which I spoke of in my last post) and ran across the following, the arms of "Lord Kipling of Mandalay:" 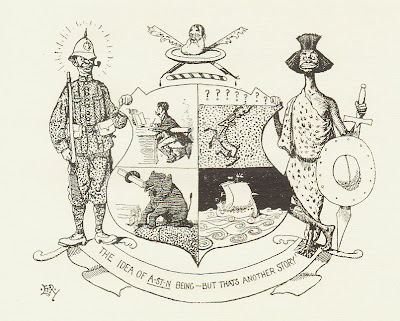 The blazon given in the Book of Arms is:

Arms: Quarterly, i, A review laudatory richly deserved quite proper; ii, an heraldic jungle-bok rampant under several deodars or mem-sahibs or words to that effect; iii, a lordly elephint a pilin' teak; iv, an argot-nautical vessel "in verse" in full sale, classed A1 at Lloyds, charged with a cargo of technicalities all warranted genuine.  Crest: On a charger argent the head of a publisher urgent.  Supporters: Dexter, A tommy atkins in all his glory, arrayed proper by a plain tailor from the hills; Sinister, A first-class fighting man or fuzzy wuzzy of the Soudan, regardant sable on a British square charged with an elan effrontee.
Posted by David B. Appleton at 6:00 AM