So there I was, strolling through McCarran International Airport in Las Vegas, Nevada, heading home after several days visiting with my mother and my sister, and a somewhat heraldic teeshirt in one of the shops there caught my eye.  It was black, and had a nicely drawn (and large) white fleur-de-lys on it, outlined with shiny metallic studs and surrounded by some complex line artwork.  So I entered the store, and looked for one in my size.  Alas, there were none.  There were several in smaller sizes, but nothing in my size or larger.  They did have a similar shirt done in black and dark gray on a gray shirt in my size, but that one didn’t really appeal to me as much.  So I stepped out of the store, with their having lost a really easy sale.

Right next door was another shop that was exclusively teeshirts, sweatshirts, and other clothing, so I thought I’d go ahead and see if they had anything heraldic in stock (and in my size).  Sure enough, they did.  So I came home with not one, but two, heraldic teeshirts added to my collection. 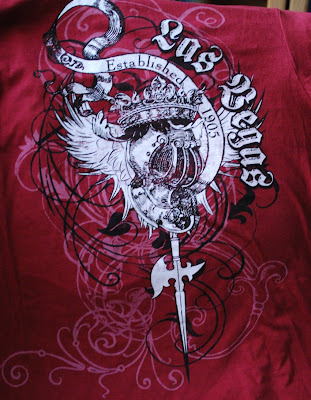 The first, this one in red, caught my eye not only because of its bright color, but because of the lines of the helmet and mantling, not to mention the inverted polearm issuing from beneath it.  The words “Las Vegas” and date on the scroll refer to the establishment of Las Vegas as a railroad town in 1905. 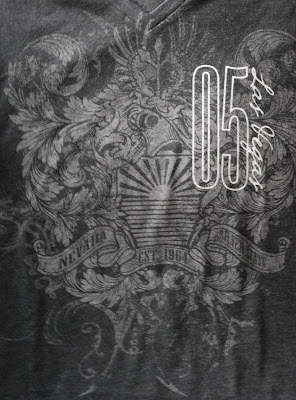 The other, in gray, has a coat of arms on this that reminds me of nothing quite so much as the flag of Nevada’s neighboring state of Arizona (http://flagspot.net/flags/us-az.html).  The mantling on the helm is very well done, though I haven’t quite decided what the part of the crest between the two wings is supposed to be.  It might be a sprig of three acorns, but I’m not at all certain about that.  I will have to ponder it some more as I wear the shirt.  Here again, the “Las Vegas” and “05" refer to the establishment of Las Vegas in 1905.  The scroll under the coat of arms has an error, I believe.  The scroll has the words “Nevada” and “Silver State,” the latter being the nickname of the state, and the words "Est. 1964," but Nevada became a state in 1864; I suspect the 1964 is an error for that notable date in Nevada history.  (I can’t think of what else it might be; I was living in the state in 1964, and don’t recall anything besides Nevada’s centennial of its admission into the Union that was worthy of note in that year, and I think I would have noticed if there had been.)

But the fact that I could find three different shirts bearing heraldic themes in a couple of small shops at an airport is more proof positive of my longstanding statement that “You can find heraldry everywhere!”
Posted by David B. Appleton at 6:00 AM