A recent article entitled "Looking back on a myriad of Martles" in the McGill Reporter, "the official news source of McGill University" in Montreal, Quebec, Canada, talks about the history, and various renditions, of the University's coat of arms, which features three martlets (an heraldic swallow which has no feet at the ends of its legs). 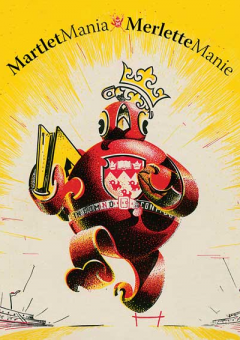 Martlets have appeared in university publications and other items since 1850.  In preparation for the University's 190th anniversary celebrations, Theresa Rowat, Director of McGill University Archives, and her team have created two on-campus displays to show how the martlets have been used over the years.  (The image above is from an intercollegiate hockey program in 1946.)

The University's arms were granted by the English College of Arms in 1922.  Different versions were in use until 1975, when the University's Board of Governors settled on the current version, which was registered by the Canadian Heraldic Authority in 1992.  (Alas, the CHA has not yet gotten its grants from that early up on its website yet.  They do have the vast majority of their grants, etc. from 1995 onwards accessible on-line, though.  You can consult The Public Register of Arms, Flags and Badges of Canada at: http://archive.gg.ca/heraldry/pub-reg/main.asp?lang=e)

The full article, with more illustrations, can be found on-line at: http://publications.mcgill.ca/reporter/2012/03/looking-back-on-a-myriad-of-martlets/

How great to see an institution not only using, but celebrating, their coat of arms!
Posted by David B. Appleton at 6:00 AM