Today's post is less about heraldry than it is about the weather.  As some of you may already know, the Dallas, Texas area where I live has had some unusual (for Texas) weather lately.  Last weekend, I was out working in the yard in my shirtsleeves.  Then, beginning on Monday, the temperatures started dropping and we got some precipitation: rain turning to sleet and then to ice.  Tuesday morning, the drive in to work was very tricky -- the area doesn't normally get much of this kind of weather, and isn't prepared to handle it very well when it does happen occasionally.  In fact, I most of the way in to work when I got a call that the office where I work would be closed that day.  Since I was already most of the way there, I just kept going and spent the day at work, though I did leave early.  Wednesday, the call that the office was closed came early enough that I hadn't left home yet, so I stayed home.  Yesterday, Thursday, the office opened late, so I made the drive in.  All this time the temperature had not gotten above freezing, so there was still a lot of ice on the roads.  Although the office closed early, I got home about the same time as I usually do under normal conditions.  (This meant that my normal 35-45 minute commute took two hours!)  And when I went to bed last night, they were predicting "some" snow.  And when I got up this morning and looked out of my home office window, this is what I saw .... 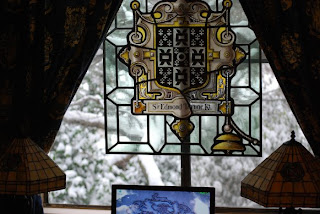 See that white stuff showing through the window on the branches of the oak tree out there?  Here, let me show you a closer shot so that you can get the full effect. 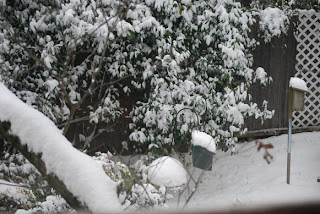 This is what my backyard looks like today.  Apparently it's pretty cold out there, too.  (Well, it's not predicted to get above freezing until tomorrow.)  As a semi-heraldic example, here's what I'm blazoning as a "dove close fluffant proper" in the branch of the Japanese maple in the back yard.  I think he's about doubled what his actual size is, hunkering down from the cold. 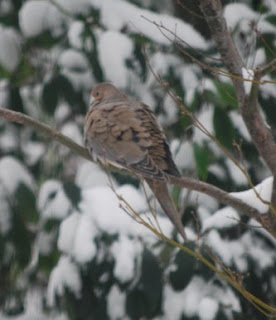