Heraldry in the Catalogue

Oh, dear. I received, as I do periodically, a catalogue in the mail from a firm called Design Toscano. They sell a lot of interesting, and sometimes oddball, goods. I receive their catalogues because I’ve ordered a couple of heraldic ties from them in the past. These heraldic ties, and their other ties, can be found on their website on-line at http://search3.designtoscano.com/?D=ties&Ntt=ties&Dk=0&N=0

I was a bit put off by one item in the most recent catalogue, on page 7, titled “’Queen Victoria’s Royal Coat of Arms’ Shield Sculpture.” 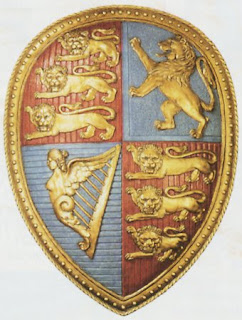 The text with it says it is “Inspired by Queen Victoria’s 1837 Royal Coat of Arms….” Well, yeah, “inspired by” is probably accurate, in the same way that some movies which often bear little or no resemblance to the book of the same title are said to be “based on” that book.
And, in fact, three of the four quarters of the shield containing what is even today the current Royal Arms of the United Kingdom of Great Britain and Northern Ireland are correct, containing not only the tinctures but the correct hatching for the tinctures of the field. (Vertical lines for gules, or red; horizontal lines for azure, or blue.) It is, however, the second quarter, which should contain the arms of Scotland (Or a lion rampant within a double-tressure flory-counterflory gules) that the inspiration fails, as you can see from this rendition of those arms. 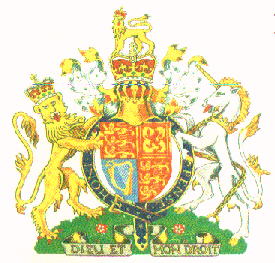 My guess is that they thought they would (and, in fact, they actually might, at least in Great Britain) run into legal problems if they accurately reproduced and sold the Royal Arms. Because, of course, this way they can argue that with the second quarter being Azure a lion rampant or, the arms they are selling are not the arms of the United Kingdom.
But then, of course, they really shouldn’t be calling the shield “Queen Victoria’s Royal Coat of Arms,” because it’s not.
Posted by David B. Appleton at 8:00 AM