(New) Herald in the News!

An article published today (Sunday, December 19) on News.Scotsman.com at http://news.scotsman.com/scotland/Expert-on-coats-of-arms.6665369.jp notes the promotion of our good friend, Elizabeth Roads, to the title and rank of Snawdoun Herald in the Court of the Lord Lyon in Edinburgh.  (The photo of Mrs. Roads below was taken at the International Congress of Genealogical and Heraldic Sciences in St. Andrews, Scotland in 2006.) 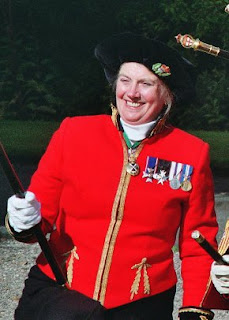 A quick review of the listing of the officers of the Lyon Court at http://www.lyon-court.com/lordlyon/CCC_FirstPage.jsp leads me to believe that Charles Burnett, Ross Herald, has retired, as he is no longer listed on that page. (I have since confirmed that this is the case.  He reached the mandatory retirement age of 70.) His retirement has created an opening for Mrs. Roads' promotion.  Her promotion now leaves an opening for a new pursuivant at the Lyon Court.  (And that opening almost makes me wish that I lived in Scotland.  I'd apply for it!)

Congratulations to Elizabeth Roads, Snawdoun Herald!
Posted by David B. Appleton at 5:04 PM