A Little More Heraldry in the Holy Spirit Church

The other special bit of heraldry in the Holy Spirit Church in Heidelberg that I’d like to share with you was affixed to one of the long walls inside the church. 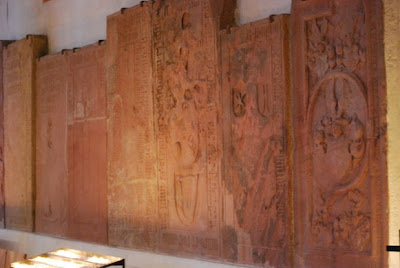 These were a display of memorial stones that you often find in the floors of European churches. The ones here are generally pretty worn; on some the lettering and coats of arms are still kind of visible, while others are nearly featureless, with the remainder somewhere in between. (On one of the individual stones that I looked at, you could make out the lettering on the right (sinister) side, but that on the left (dexter) side was too worn to decipher.) 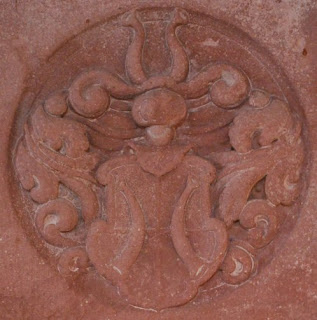 Still, there was a nice variety of arms depicted on the stones (on some of them, though, you could only see where a coat of arms should have been but which has been worn down until it is impossible to make out what it was), and I appreciate the fact that the church has tried to preserve them when they made renovations and restorations to the building instead of either tossing them out or cutting them up and “repurposing” them.
Posted by David B. Appleton at 6:00 AM