One of the other things that I was hoping to see in our day at Heidelberg is the Holy Spirit Church there. And, in fact, if you knew what you were looking for, you could find it very easily from the heights that the castle there sits on. Yeah, it’s that “little” building in the center in this photo. 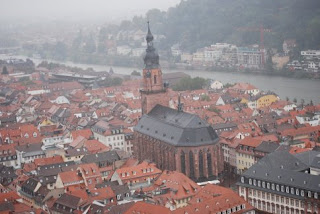 I was looking for it, not because I knew that my great-grandfather had attended there, but because I had found a number of individuals of the same (very rare) surname, Lischett, who had attended there, and I pretty much figured that if their name was Lischett and they lived in or around Heidelberg, they also pretty much had to be a relative.
I was fortunate in that our tour group walked right past the church on our way to lunch. And I saw that it was open. So I ate my meal a little faster than everyone else, and hot-footed it back down the street to the Holy Spirit Church, where they not only let me inside but said (after I asked; I always ask first) that I could take photographs. So I did. For the next 45 minutes or so, until the rest of the group was ready to head down to the river for our boat ride up and down the Neckar River.
Have I mentioned before that you can find heraldry everywhere? I seem to recall mentioning it once or twice before. And it was equally true here. One of the coolest bits of heraldry was an old painted wall inside the church that had been uncovered during some restoration work. 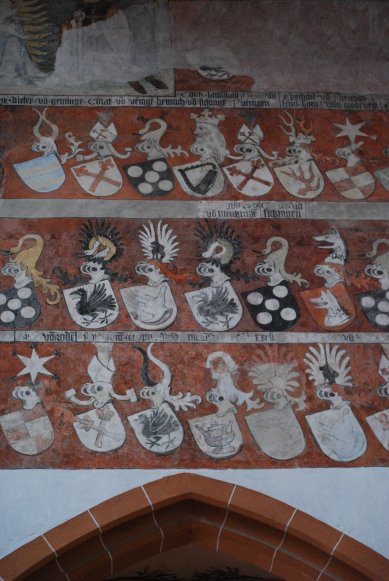 It is, obviously, no longer complete, but it is also an old armorial of arms. I haven’t had the time yet to do it, but I hope to be able to sit down fairly soon with all of my photos of this wall (not all of it is in the photo above), stitch a few pictures together, blow them up to their fullest size, and see how many of these coats of arms I can identify. Unsurprisingly, the guidebook I bought about the church is aimed at the general tourist, and not those of us with an interest in heraldry, and so it doesn’t give as much detail about the arms as I might have wished, but there is a paragraph giving a little general information. They are the arms of the southern Odenwald knights, the Kraichgau, who called themselves the “Upper Donkey” Society, a 15th Century tournament society. (Another set in the northern Odenwald were the “Lower Donkey” Society.)
How cool is that? Wander off looking for relatives, and find a painted armorial of knights.
Posted by David B. Appleton at 6:00 AM