(I trust that you will pardon the reference in the title to the old Jack Nicholson movie of the same name.)

Given the "quality" of the heraldic design of the coat of arms/logo of Laredo, Texas, I thought we'd cross at lease figuratively over the international bridge which is so prominent in those arms and see if the arms of Nuevo Laredo, Mexico are an improvement. 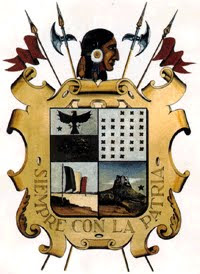 And, yes, in a way, they are.  They are still fairly pictorial, especially the third and fourth quarters, but overall, compared to the arms of their sister city on the north side of the Rio Grande (and, no, alas, most Americans - that is to say, Yankees - don't pronounce the "e" in Grande), they are an improvement.  Not so much an improvement that I would hold them up as standard to be strived for in heraldic design, but nonetheless an improvement.

North American heraldry can be so interesting at times, can't it?
Posted by David B. Appleton at 8:30 AM