Okay, here’s Part Two of this series of movies with good, bad, or mixed heraldry. Last time we covered movies with poor heraldry. This time, it’s movies that have a mix, some good, some bad:

Army of Darkness (1992) starring Bruce Campbell. Color on color heraldry, but some good stuff, too.

A Knight in Camelot (1998) starring Whoopi Goldberg. On the plus side, the arms for Arthur are consistently displayed, and accurately match one of the three most commonly portrayed versions of Arthur’s attributed arms. On the down side: the German coat of arms on the wall; Sir Boss’ "coat of arms"; Sagramore’s coat of arms with the Norse beast.

The Bandit of Sherwood Forest (1946) starring Cornel Wilde. Some of the heraldry wasn't half bad. Robin, the Earl of Huntington, bore Per pale gules and Or, a doubled-headed eagle counterchanged. It may not be heraldry of the period for England, but it’s not bad for all that. 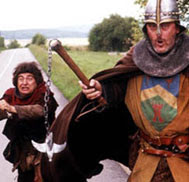 The Visitors (original title: Les Visiteurs) (1993) starring Jean Reno. The heraldry was pretty good for the most part, but some of it, well ... maybe not so much. (In any case, the original French movie was a far, far better film than the American remake, Just Visiting, which had a similar mix of good and bad heraldry.)

Henry V (1944) starring Laurence Olivier. The use of heraldry, and heralds, was for the most part very good. However, some of the heraldry was not, as we say down here in Texas, quite "right". (As in, "That boy ain’t right." In this case, "That heraldry ain’t right.")

Monty Python and the Holy Grail (1975), starring the Monty Python crew. Metal on metal heraldry (e.g, , King Arthur’s surcoat, Argent a sun in his splendor or), and "Brave Sir Robin’s arms with a chicken courant regardant, but some decently done heraldry, too.
Posted by David B. Appleton at 8:18 AM