Over on Blog de Heráldica in his post of August 4, 2009, blogger José Juan Carrión Rangel had the following image of a very logo-like rendition of the coat of arms of Spain. (Here compared with a more usual rendering of the arms.) 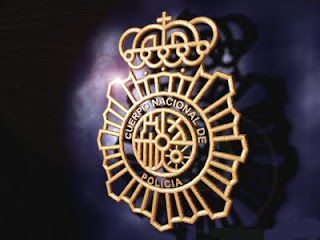 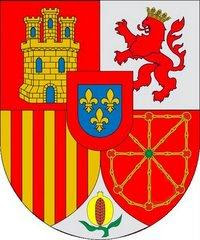 I found the image interesting because I think it helps to support a point I have made in this blog before (click on the keyword "logos" to see earlier posts): that it is unnecessary for civic bodies and corporations to discard their "outdated" coat of arms to adopt a more "modern" or "relevant" logo to use as their visual identifier.
In the example above, the central design is quite clearly the national arms of Spain: quarterly Castile, Leon, Aragon, and Navarre, with the point entée of Granada and the inescutcheon of the House of Bourbon. Admittedly, it’s been sufficiently simplified that there is no Granadan pomegranate, neither fleurs-de-lis nor bordure on the Bourbon inescutcheon, and the "lion" is nothing more than a stick figure. But the fact remains that you can tell immediately that it is the arms of Spain. (And isn’t that really the reason for heraldry to begin with: identifiability?)
It’s modern, it’s up to date, and yet it is just a simplified rendition of the national coat of arms. No need to hire someone to design an alternate modern logo. Just redraw the arms in a less traditional style, and there you go!
Posted by David B. Appleton at 8:16 AM