Doggone it! This is what comes from living on the "Third Coast", down here in Texas, instead of up, say, near New York. I received, as I do periodically, an email announcing yet another presentation of heraldic interest, one that I would love to attend. In New York City. Which is not an easy drive from Dallas. As much as I sometimes wish it were.

It turns out that on Tuesday, September 22, the College of Arms Foundation and The NYG&B Society Committee on Heraldry are hosting a presentation entitled "Heraldry in the Movies: the Good, the Bad, the Truly Awful". Which, unless I happen to win the lottery between now and then, I will, alas, not be attending.

So, anyway, having discussed some good and some bad movie heraldry here before (back in March 2009, with Kenneth Branagh’s Henry V and The Knight’s Tale for the good, The Black Shield of Falworth and The Adventures of Robin Hood with Errol Flynn for the bad), the announcement of this presentation in New York next month has inspired me to look through my collection of movie reviews* to see what other movies I’ve seen that had either particularly good or especially bad heraldry (and some which had a mix of both good and bad). And I thought I’d give you a kind of "short list" of these, with brief comments about why the heraldry in them is good, bad, or a mix of both. In this post, we’ll cover some of the "less good" ones. Next time, those with good and bad heraldry. And in the third part, those with good heraldry.

Here’s some of the bad ones, in no particular order: 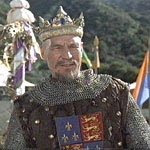 
Ever After (1998) starring Drew Barrymore. Color on color heraldry.

Captain from Castile (1947) starring Tyrone Power. Quarterly gules and sable, a bordure counterchanged sable and Or was not Iberian heraldry. 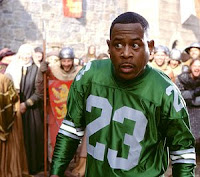 Black Knight (2001) starring Martin Lawrence. Most of the heraldry on the banners is wrong. England, but the lions are not facing properly. The Dauphin of France, but in the wrong colors. The flag of modern Hungary.

Lancelot: Guardian of Time (1997) starring Marc (The Beastmaster) Singer. The title alone should give you and idea of how bad the heraldry is.

Joan of Arc (1999) starring Leelee Sobieski. Color on color heraldry. (In the still from the movie here, a black tower on red, in a coat of arms that is clearly based on, but isn't, the arms of Spain.)

* In the guise of Da’ud Bob ibn Briggs, Historical Drive-In Movie Critic, I write reviews of movies set in the Middle Ages and Renaissance, as well as pre-technological fantasy worlds; our motto: "We watch ‘em so you don’t have to." For more about this aspect of what I do, check out http://www.appletonstudios.com/movies1.htm
Posted by David B. Appleton at 8:17 AM