It is the same with heraldry. I wrote a paper several years ago entitled “New Directions in Heraldry” (a copy of which may be found on-line at http://www.baronage.co.uk/2002d/appleton.pdf and from the link in the left column here at this blog under “Articles I Have Written” at http://www.appletonstudios.com/Congress2002DBA.pdf), the thesis of which was that of all the modern innovations and introductions of new charges, etc. that we see in heraldry today are not a new phenomenon at all, but that the field of heraldry has always added new stuff to its repertoire from its earliest days to now.

The stimulus for writing the paper was the disputes I would sometimes see between heraldry enthusiasts in one or another of the internet newsgroups, where someone would protest that this or that innovation or the grant of a modern charge (for example, a locomotive) was almost an affront to the purity of the field. Sometimes I would find myself agreeing (to a certain extent) with some of these criticisms, but at other times I would wonder why the use of a modern charge or line of division would cause such emotional upset, since as I saw it, the field had since its beginnings added innovative lines of division and novel charges as new technologies came into being.

After presenting the paper, I found myself in a conversation where the other party seemed to believe that I was actually advocating all of the recent changes in the field that I thought I was simply reporting on (and trying to show that the process of innovation in heraldry was not new). The locomotive was brought up as an example. “Why couldn’t they just use a wheel to symbolize the same thing?”, as if I had urged using it. (“Well,” I thought to myself, “they could, but apparently what they wanted was a locomotive.”)

I find myself with mixed feelings about some heraldic innovations: for example, the inheritance of arms by women allowed by the Canadian Heraldic Authority (thus separating the arms from the surname). On the one hand, I like to be able to know the 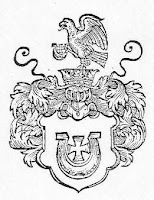 arms/surname link; on the other hand, I understand the legal requirements of Canada that mandated such a change, leaving the arms to follow the blood (as former Chief Herald Rob Watt put it) or the DNA (as I put it). And, too, there have been places, like Poland, where the surname/arms link has never been the rule. (For example, more than 650 families, many unrelated, bear the Jastrzebiec herb arms of a cross patty within an inverted horseshoe [Górzynski & Kochanowski, Herby szlachty polskiej].)

So sometimes we just have to step back from our personal prejudices and take a look at the bigger picture of heraldry, and realize that change has always been a part of the field. And, too, that de gustibus non est disputandum.
Posted by David B. Appleton at 8:02 AM