Someone pointed out a pretty cool site for heraldry the other day. The name of the site is Videojug, which leaves me a little cold, but they didn’t ask me before naming it. Of interest to people like us, though, are several short (the longest is 10:00 minutes) videos explaining different aspects of heraldry. There are seven of these short videos: six by Peter O’Donoghue, Blue Mantle Pursuivant at the College of Arms and one by genealogist Dr. Nick Barratt. There is a lengthy list lower down on the page that gives all of the sub-topics covered in each video. Each video can be downloaded (you have to sign up with Videojug to be allowed to do this), and is available in a text version which can be displayed and read or printed out. 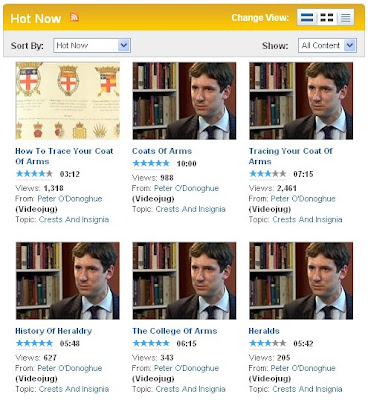 I haven’t had the time to sit and watch all of the videos yet, but the information contained in the ones I have seen seems to be accurate. (Well, ignoring "little" things like identifying Mr. O’Donoghue as "Blue Pursuivant" instead of Blue Mantle Pursuivant; misspelling A.C. Fox-Davies last name by dropping the "e" in the text version; and some of Dr. Barratt’s statements demonstrate he is much more a genealogist than a herald. But that’s why there’s a "Mostly" in the title of this post.)
In any case, I thought it was worth passing along to you. You can find this page on the web at: http://www.videojug.com/tag/genealogy-crests-and-insignia
Enjoy!
Posted by David B. Appleton at 8:47 AM

Email ThisBlogThis!Share to TwitterShare to FacebookShare to Pinterest
Labels: College of Arms