A “New” Coat of Arms for St. Augustine, Florida

Over 275 years after applying for them! (And people think that waiting a year or a little more to get a coat of arms from the English College of Arms is a long time!)
Founded in 1565, St. Augustine, Florida claims to be the oldest continuously occupied settlement of European origin in the United States. The city’s website notes: "Forty-two years before the English colonized Jamestown and fifty-five years before the Pilgrims landed at Plymouth Rock, the Spanish established at St. Augustine this nation's first enduring settlement." 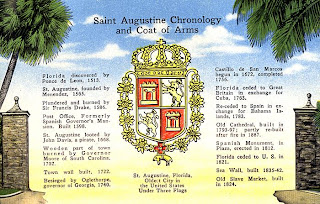 The city had for a long time been using a simplified version of the arms of Spain, Quarterly Castile and Leon. These same arms appear carved over a doorway at Fort Marion, the city’s old Spanish fort. But in 1991, the City Commission passed a resolution authorizing a formal request to Juan Carlos I, King of Spain, for an official coat of arms for the city. Now, back in 1715 the citizens of St. Augustine petitioned Philip V, King of Spain, to grant the city a coat of arms. There was no record of the request being fulfilled, and so a new grant was sought.
Research conducted by Vicente de Cadenas y Vicent, Cronista Rey de Armas (Chronicler King of Arms of Spain), found that a coat of arms for the city had indeed been authorized on November 26, 1715. The city received its "new" coat of arms on October 12, 1991, almost 276 years after it was granted.

The first quarter, the upper left side of the shield, includes a gold fleur-de-lis on a blue background. This is a symbol of the connection to the French House of Bourbon, since King Philip V of Spain was the grandson of King Louis XIV of France. In the second quarter, the upper right area, there is a gold castle on a red background, representing Castile. In the third quarter, there is the purple lion of Leon on a silver/white background. In the fourth quarter there is an arm in armor holding a sword on a red background, honoring St. Augustine as a Spanish military outpost. The four quarters of the shield are divided by a gold cross. The mural crown above the shield indicates that this coat of arms is for a city.
Maybe it’s just me, but it seems to me that if you are going to wait 275 years for a coat of arms, you might hope to get one that doesn’t belong to the "kitchen sink" (instead of "everything but the kitchen sink," throw in the kitchen sink, too) or "resume" (where everything important you’ve ever done is referenced on the shield) schools of heraldry. And, too, 1715 was during the period of heraldry known informally as "the Decadence," when coats of arms were designed and granted that were, shall we say, did not follow so closely the simpler, more cohesive designs of earlier years.
Still and all, though, it’s nice that St. Augustine finally got their coat of arms, even if it was 275 years later.
Posted by David B. Appleton at 9:47 AM