Heraldry In The News!

An article in the Irish Times dated May 19, 2009, headlined "Limerick to get offical coat of arms" (found on-line at: http://www.irishtimes.com/newspaper/ireland/2009/0519/1224246881270.html) notes that after using a coat of arms "since at least the 17th century" but which arms were not registered in all that time, the City of Limerick is having that coat of arms confirmed "on the basis of long use". The images below show what they’ve been using all these centuries: the one on the left is from the website "Heraldry of the World" (formerly "International Civic Heraldry"), and the one on the right is from CivicHeraldry.com.

The Latin motto means "An ancient city well versed in the arts of war."

Of course, granting arms to Limerick leads to limericks about Limerick’s arms. This one by Peter Constantine (slightly edited by me for better "flow") appeared in the rec.heraldry newsgroup the same day:

On a shield of gules (meaning red)
Stands a castle, portcullis rais-ed;
Beneath this a motto
It means not a lot-o
And thusly is Limerick prais-ed. 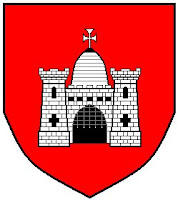