“Learn Something New Every Day”

It’s a great philosophy: "Learn something new every day." And it seems to me that hardly a day goes by that I don’t learn at least one new thing. (Of course, it might be argued that, at my age, I’m just relearning stuff that I had once known but then forgotten. And they do say that "The mind is the second thing to go."*)
Still, I learned something the other day that I’m pretty sure I didn’t know before, which makes it new. And since it was of interest heraldically, I thought I’d share it with you. 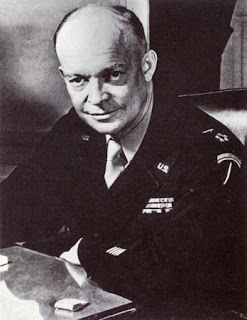 I’d known for some time that General and later President Dwight D. Eisenhower had to needed to come up with a coat of arms in order to receive the Order of the Elephant from Denmark following WWII. The part that I didn’t already know (but which I learned from the article here: http://www.nytimes.com/2006/06/13/washington/13heraldry.html?scp=4&sq=heraldry%20expert&st=cse) is that his coat of arms was originally designed by the office that is now The Institute of Heraldry of the U.S. Army, today based at Ft. Belvoir, Virginia. A more complete narrative of the General’s reluctant adoption of a coat of arms can be found at: http://americanheraldry.org/pages/index.php?n=President.Eisenhower There is also a transcription of a letter from the President regarding the coat of arms and motto here: http://www.eisenhowermemorial.org/presidential-papers/first-term/documents/851.cfm
The picture below is of Eisenhower’s arms as they appear in Frederiksborg Castle, photographed by our friend Sunil Saigal. 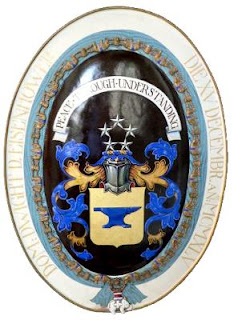 I’ve always liked Eisenhower’s arms, not the least because they are very simple and therefore easy to identify. They also play on his surname, which means, effectively, "iron hewer", or blacksmith. The crest, of course, is the five stars of his military rank.
Given some of the designs that come out of The Institute of Heraldry, which I realize are often "customer driven" and so seem to have many of the problems of insignia "designed by committee" and which may sometimes bear only a passing relationship to traditional heraldry, to see such a simple, clean design is like a breath of fresh air.
* I can’t seem to recall what the first is.
Posted by David B. Appleton at 8:25 AM

Email ThisBlogThis!Share to TwitterShare to FacebookShare to Pinterest
Labels: Eisenhower, The Institute of Heraldry