From Project to Predicament

Ah, the things I sometimes set myself up for. It happened this way:

Over the years, we have bought a fair number of "fairings", little china souvenirs, mostly English, with coats of arms on them. But we haven’t had a really good way to display many of them: a couple of shelf units at one end of a hallway, and a few wall shelves in my home office. (You can see a couple of those shelves here: http://www.appletonstudios.com/HomeOfficeMakeover.htm). But many of them have been residing in a closed cupboard for quite some time, as the photo here shows.

But we’d really like to display them, as we think they’re pretty and interesting, and hope that visitors to our home would also enjoy them. So over the years as we’ve shopped at various antique stores, etc. I’ve been looking for shelves and/or display units for them. And a while back I found one: a three-level, half-circle display cabinet, at a fairly reasonable price. It needed a little fixing up - one of the two glass shelves was missing, some of the hardware had been replaced with inferior items - but basically it was in pretty good shape. So I bought it. Later, I found a shop that would cut me a replacement glass shelf to measure, and more recently took off the added hardware and replaced the door handle. I also got a nice little LED light fixture that was thin enough to mount under the cabinet’s top to illuminate whatever we might put in the cabinet. I think it came out pretty well, as you can see here. 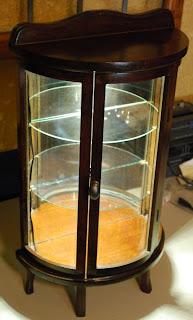 The trouble, though, is that now that it’s done, I’m having trouble figuring out a good place to put it in the house. I’ve tried it on top of the bookshelves in my office, but it’s really a little too tall for them. I’ve thought of perhaps placing it in the "library" downstairs, but the decor there is of a vastly different theme than heraldry (shocking, I know, but it’s true!), and it would also involve moving/rearranging/eliminating some of the pictures we’ve got on the wall down there to make the visual space for it. So I’m in a bit of a quandary - I’ve got this really nice display cabinet, fixed up with a working light and everything, and don’t (yet) have a place to put it.