The English definition of an heraldic hatchment is taken here from Parker's A Glossary of Terms Used in Heraldry, cf. "Achievement":

"Coats of arms in general, and particularly those funeral escutcheons, which being placed upon the fronts of houses or in churches, or elsewhere, set forth the rank and circumstances of the deceased. ... In France, the litre, or lisiere, hung around the churches, answers, perhaps, to the hatchment."

In The Netherlands and Flemish Belgium (where we were visiting at the time, in Ghent), these are called rouwbord, literally meaning "mourning shield".
So today, and for the next few posts, we're going to be looking at some of the "mourning shields" decorating the walls of St. Bavo's Cathedral.
The first will be a fairly recent memorial with a coat of arms containing an unusual charge. 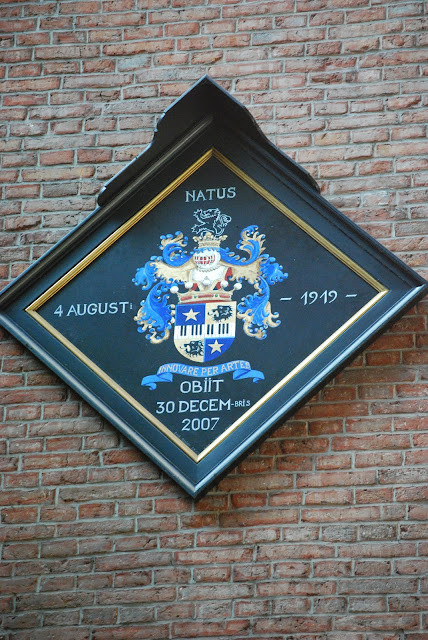 This memorial board is that of Jan Briers (1919-2007), whose arms contain an unusual charge (though not the only one in Belgian heraldry) a piano keyboard.
He founded in 1958 a music festival called the Festival of Flanders.

According to Flemish heraldist and friend Luc Duerloo, Briers "was raised to the nobility because whenever it’s the Flemish nationalists’ turn, they put forward someone from the cultural sphere. It would be political death if a politician accepted the honor. Jan Briers has a Wikipedia article in Dutch. His son became governor of the province of East Flanders (nowhere near an American governor). It’s an office not an elected post."

Some of you may recall an Englishman who also has a piano keyboard on his coat of arms, although Sir Elton John's keyboard is a chief rather than a fess: 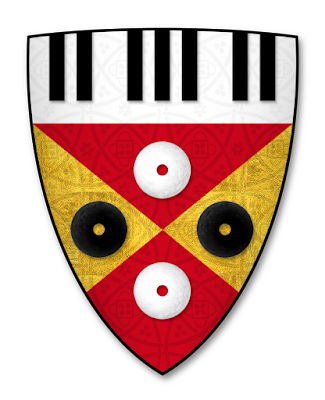