A Husband and Wife Memorialized


There are actually three rouwbord or memorial boards in today's set, a pair to a husband and wife, and another to someone completely unrelated to them. 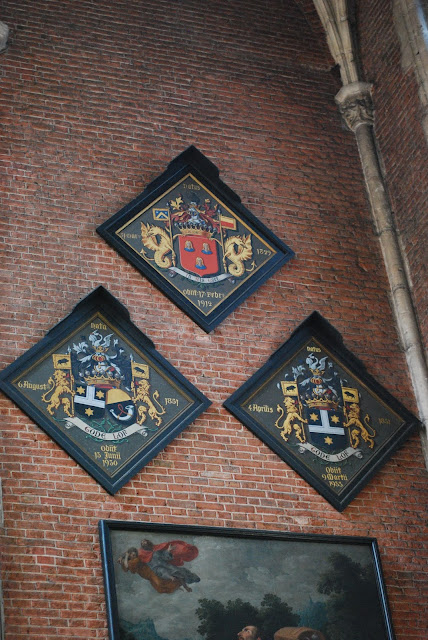 We have see the arms in the uppermost rouwbord in the the memorial board of Gabrielle Goethals, the wife of Octave de Kerchove d'Exaerde.
Here, though the man being memorialized is Louis Goethals, comte Goethals, 1829-1912. His wife, not memorialized here, was Flore Malfait, 1840-1898. The Goethals arms are blazoned: Gules three maiden’s busts/heads affronty proper crined or vested azure.
The two rouwbord immediately below that of Louis Goethals are those of a wife and her husband. 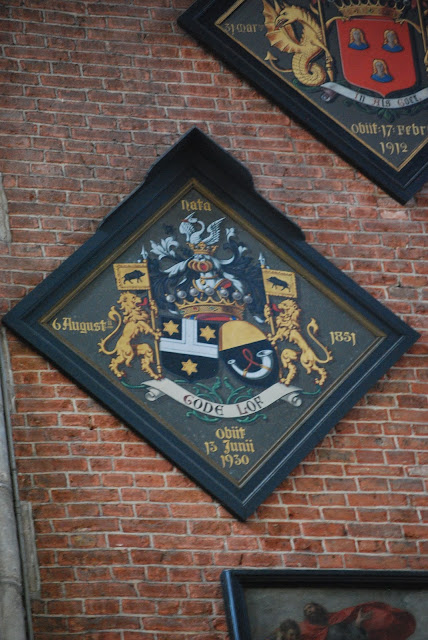 The arms on the left on this board, and on the other memorial board (alas, the photograph I took of that one by itself turned out to be out of focus, but you can get a better view by clicking on the first image above), are those of her husband, Adrien de la Kethulle de Ryhove, 1851-1933. His parents were Eugène de la Kethulle de Ryhove (1823-1897) and Gabrielle de Ghellinck (1830-1861). Adrien and Irène were married on November 11, 1875.

His arms (here and on the other rouwbord, are blazoned: Sable a fess conjoined to a demi-pale issuant from chief argent between three mullets of six points or.
It's always nice to see memorials (whether armorial or not, but we all know how I feel about heraldry!) to a husband and wife together.
Posted by David B. Appleton at 2:00 AM