And ... Almost Heraldry On Shields!

So, having looked at blank shields in Antwerp, Belgium, followed by stuff on shields that wasn't heraldry, we now come to some advertising that is truly almost heraldry!
First off, we have the logo of the CION Red Stars, a voetbal (football, what we Yanks refer to as "soccer" because what we call "football" over here is nothing like futbol everywhere else in the world) team based in Vlaardingen (on the west side of Rotterdam) in The Netherlands. This particular bit of "heraldry" was, as you can see, found affixed to a lamppost. 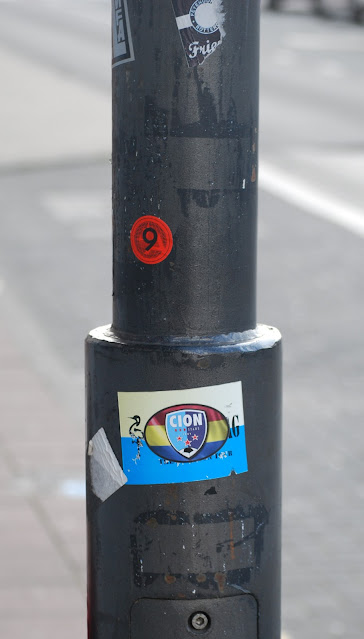 If I had to try to blazon this logo, it would be something along the lines of: Per pale bleu celeste and azure, in pale the letters CION argent, RED gules and STARS argent, and 1951 argent, in base three mullets gules fimbriated argent two and one, issuant from base a demi-football [or soccer ball, if you're an American] proper. (A quick search on the internet demonstrates that the tri-colored oval behind the shield is not an intrinsic part of the club's logo.) It's a bit of a mess as blazon, but then again, what is being blazoned is only approaching heraldry, and falling a little short of it. 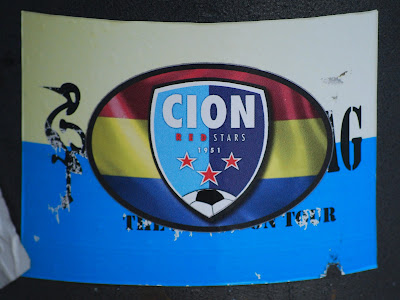 Our other example of "almost heraldry" is even closer: Omer Traditional Blond Ale.
This one is much easier to blazon, even though it fails to follow one of the basic rules of heraldry, the Rule of Tincture. ("The most basic rule of heraldic design is the rule of tincture: metal should not be put on metal, nor colour on colour" Humphrey Llwyd, 1568.) So for this we have a blazon of: Sable a chevron within a bordure gules.

Our next item of "almost heraldry" is an old friend that we last saw on our trip to Arras, France: the Jupiter Brewing Company. It's not especially easy to blazon this one, if only because the bull is "stepping" outside of the shield, but here's my poor attempt: Gules a bull passant regardant sable armed (mostly) within a bordure the shield crowned argent. Once again, not quite heraldry, and so not amenable to easy blazon. 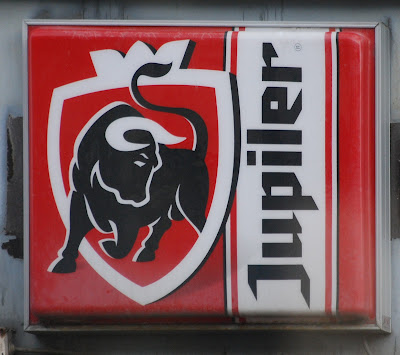 So, let's say that you've watched the CION Red Stars play a game, and you've quenched your thirst at the local bar or sidewalk café with Omer Traditional Blond or a nice Jupiter Pilsner. Is it time to go home now? Well, how would you tell? Why, by looking at your Tudor watch, of course!
Our last bit of "almost heraldry" seen in Antwerp was in a jeweler's shop advertising Tudor and Breitling watches. (And as it turns out, some Tudor watches have Breitling movements, so you can buy the best of both.) A rough estimate at a blazon for Tudor would be: Argent on a chief gules two billets fesswise in fess argent all within a bordure gules. (Yes, I know that doesn't speak of the fact that the top edge of each "billet" dips. Still, at any real distance, you can't see that that is what is going on on the shield.)

And there you have it! Our examples of blank shields (in the post before last), not-heraldry (in our last post), and almost-heraldry that we found in our wanderings about the streets of Antwerp!
Next time: We get back to real heraldry. Won't that be nice?
Posted by David B. Appleton at 2:00 AM