The central motif of the armorial stained glass window that we're looking at is the Adoration of the Magi. This window was donated by the Dassa-Rockox family. 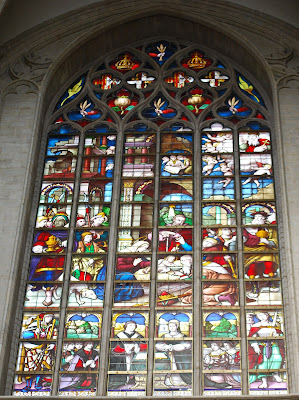 The images of Ferdinando Dassa and Barbara Rockox and their children (four sons, left, and two daughters, right) appear at the base of this beautiful glass window. Both parents kneel facing each other on a prayer bench with their children behind them.
Further to each side are their patron (and name) saints, Saint Ferdinand and Saint Barbara.

On the left we see St. Ferdinand (Ferdinand III) (1199-1252, King of Castile from 1217 and King of León from 1230 as well as King of Galicia from 1231), wearing a cloak of Castile and Leon repeats, and bearing some of his attributes: a crown, a scepter, and a globus crucifer. On the right we find St. Barbara, most notably carrying what I believe is St. Ferdinand's sword, along with some of her attributes: a crown of martydom, and a three-windowed tower (two visible).
At the top of the window are the heraldic elements; here, elements of the arms of Spain: Aragon and the Two Sicilies in two window frames; Quarterly Castile and Leon in two more; with Granada below each pair; and each pair surmounted by a crown; both sets within a larger frame which helps to unify them visually into a single display of heraldry. 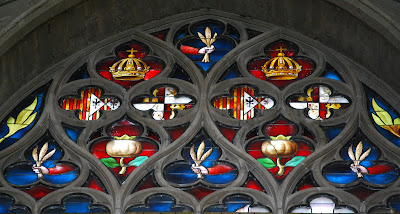 The four window portions with the arm holding palm branches puzzled me, partly because I didn't identify the plant portion as palms,* until it was pointed out that one of the attributes of St. Barbara is a palm. Puzzle solved! Presumably the leaf decorations on each side of the upper window are also palm branches.
So there you have it! A beautifully done stained glass window with a Biblical theme, images of the donors and their children, framed by their namesake patron saints, one of whom, St. Ferdinand, has his arms depicted in the top portion of the window. This last explains why we find the arms of Spain in this armorial window in Belgium.
As always, you may click on one of the images here to see a larger version, which may be worth your time to look at all of the details which have been incorporated here.
* Similarly-depicted palms can be found on the medallion of the Order of St. Barbara at https://en.wikipedia.org/wiki/Saint_Barbara#/media/File:Order_of_Saint_Barbara_medallion.jpg
Posted by David B. Appleton at 2:00 AM