Our Final Carved Armorial Memorial in the Cathedral of Our Lady

And now we come to the last large carved armorial memorial in the Cathedral of Our Lady in Antwerp, Belgium.
Like the one highlighted in our last post, this one, too, is to more than one generation in a family. 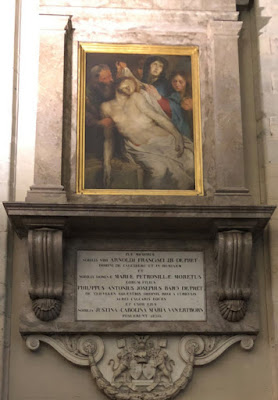 Done in more of a neo-classical style, this one frames an original oil painting. (The Baron de Pret, of whom we will speak more in a moment, was known to be a patron of the arts.)
The plaque beneath the painting tells us who is being memorialized here: 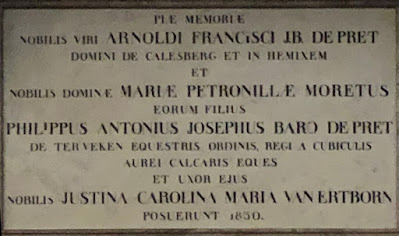 The first names are those of Arnold Francis (or François) Joseph Bruno de Pret (1722-1789), Lord of Calesberg, and his wife, Marie Petronille Moretus (1724-1778).
Below their names is that of their son, Philip Anthony Joseph, Baron de Pret de Terveken (d. 1838), and his wife, Justine Caroline Maria van Ertborn (d. 1841). She was the daughter of Emmanuel Françoise de Paule van Ertborn.
At the very base of the monument are the arms of Philip and Justina: 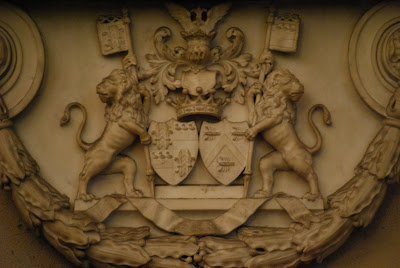 Rietstap's Armorial Général is once again our "go-to" source the blazon of these two coats of arms:
de Pret: Quarterly: 1 and 4, Argent a fleur-de-lis gules overall on a pale sable three chevronels or (de Pret); 2 and 3, Or a fess gules and in chief three martlets sable (van Horne).
Ertborn: Or a chevron gules between three crawfish fesswise sable.
The two side-by-side shields are surmounted with the coronet of baron. The crest is: A fleur-de-lis gules within a pair of wings or and sable.
The two supporters are lions rampant gardant, each bearing a lance with with a banner displaying the arms of de Pret (dexter, to the viewer's left) and van Ertborn (sinister, to the viewer's right).
The carefully draped scroll beneath the lions' feet is inscribed (you can see it better if you click on the image above to go to a larger image) with the de Pret motto: Prèt à faire le bien (Ready to do good). Which is not only a fine sentiment, but a good play on the surname as well!
Next time: More heraldry in the Cathedral of Our Lady. Should I work on the stained glass windows, or on the painted coats of arms? Find out in our next exciting blog post!
Posted by David B. Appleton at 2:00 AM