An Overdue Rearrangement of the Heraldic Library


It's one of those things that can only be put off for so long.

Well, at least if you (or in this case, I) keep buying heraldry books.

For a long time I've had four 4' tall x 3' wide bookcases to hold most of my heraldic library. But I keep buying more books, and these shelves have gotten pretty well filled up, to the point, in fact, that I've had to put some of the books on top of the shelves just to make room. (And I've also discovered that if you squeeze too many books onto a shelf, they start pushing out the sides of the bookshelf units, which isn't good for either the shelves or the books)

Anyway, here's a couple of the "Before" pictures, looking from left to right along the "bookshelf" wall in my office at home: 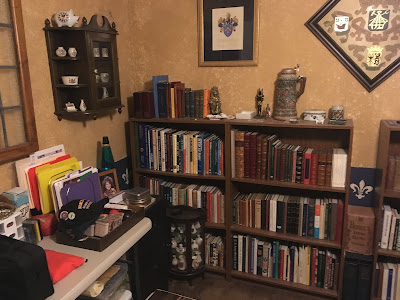 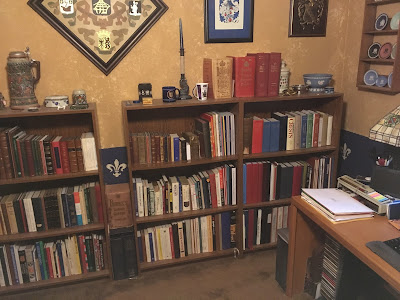 As you can see, the organization was not all that it ought to be, and it was hard to get to some of the books in the lower end corners. Not to mention the fact that there were more books than shelf space for them, making all of them very tight.

So I broke down and went on-line to find another bookshelf unit of the same size (and that alone was harder than I thought it should have been!), bought it, had it shipped, and spent two days doing only two things: putting the new bookshelf unit together, and then rearranging all of the heraldry books.

Despite the fact that it's still fairly cool here in north Texas, there was much sweating involved, and I made sure to shower each day so as not to offend my wife's nostrils when I finished up and went back downstairs.

In any event, the new shelf is in, the books are reorganized so that they are all* in the shelf units.

Of course, to make the necessary space for the new bookshelf unit, I had to move the others down the wall a bit, and move out the small two-drawing filing cabinet with all of the genealogy folders in it. (I'm still working on where that's going to go, but I do have a couple of ideas for it.)

But moving the bookshelves meant changing the balance of the stuff hanging on the wall, so I had to move most of those, too. On the positive side, though, it meant that I now have a place to put the small lighted cabinet with a collection of heraldic fairings again, and I've been able to pull a few more heraldic items out of the closet and onto the top of the bookcases where they can be better seen and appreciated. (And I see I have a little wall space above the new bookshelf on either side of the fairings cabinet to hang some more heraldry there. Score! Now to decide what to hang there.)

So all in all, though it was a tough two-days of work, I feel much better about the less crowded conditions and overall arrangement of the heraldic library here. See what you think in these "After" photos: 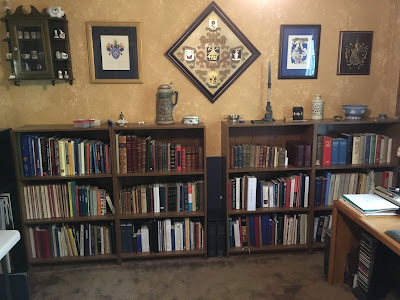 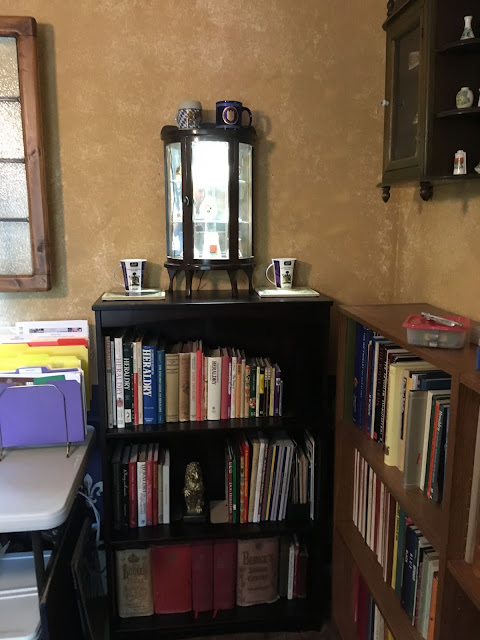 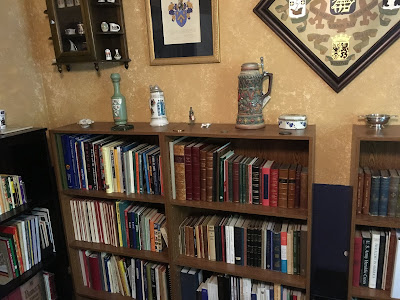 And ... since I was already in the office with a step stool and tools, I fixed something that's been bugging my sense of order for a while now. When I'd put up the (heraldic!) drapes in the office, I had placed the brackets for the drapery rod narrower than I should have, so the outer edges of the drapes hung outwards at an angle when they were opened. I've moved the brackets out about three inches on each side, and they hang straight now. See? 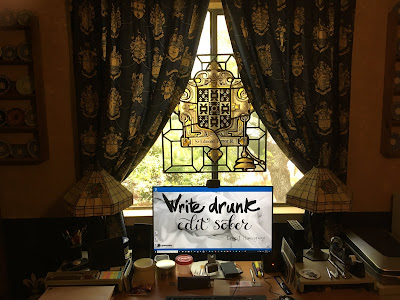 (Yes, my computer screen is a bit of advice from Ernest Hemingway: "Write drunk; edit sober." What can I say? It sounds like good advice.)

* Well, all except for the volumes I own of the Proceedings of the various International Congresses of Genealogical and Heraldic Sciences which I have attended. I'm still working on how best to work those into the bookshelves, and wondering if that's even reasonably possible, or if they should just stay on the shelf in the closet file room where they currently reside.