Doing a Herald's Job in the Middle Ages


Serendipity can sometimes be a fascinating thing.

In this instance, a friend had emailed me a link to a discussion of a poem written after the battle of Crécy in 1346. The timing was very good, as I had just earlier that week read an account of the battle in a biography of King Edward III which is my current "book to read at bedtime." (I have another book that is breakfast and sometimes lunch fare, in addition to the books in my office which I am going through while researching for a couple of heraldry projects.)

While the poem, by Colins de Beaumont, who may have taken part in the battle, is framed as a dream vision in which allegorical figures lament the fallen soldiers, during which Nature, Largess, Loyalty, and Prowess recount great deeds and heroic deaths, he also covers some of the challenges of one of the duties of medieval heralds: to count and identify the noble dead. 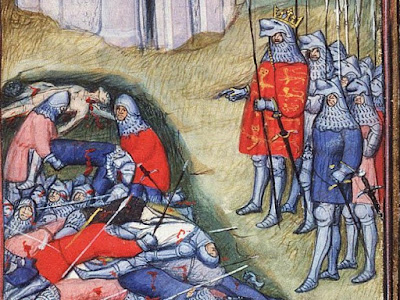 But the poet describes some of the challenges that the heralds would have faced in performing this duty:

Ah, Lord! I was so anguished
That I was seeing so many insignia there
And none that I could recognize,
Whether it were a little pennant or a standard,
A shield, a surcoat, or a pommel ornament:
All were dismantled and all were broken.

You have to know that they really had their work cut out for them when it comes down to identifying the slain by the ornament on a sword pommel.

It's a great article that gives some insight into "The Poetry of Trauma: On the Crécy Dead" by Danièle Cybulskie. (There is also a link to a book which includes the first English translation of the entire poem, Michael Livingstone and Kelly DeVries' The Battle of Crécy: A Casebook, for those who might wish to learn more of this pivotal battle.)

You can find this article on the Medievalists.net website at http://www.medievalists.net/2016/06/04/the-poetry-of-trauma-on-the-crecy-dead/

Email ThisBlogThis!Share to TwitterShare to FacebookShare to Pinterest
Labels: heralds