Armes Parlantes: An Opinion and Some Examples


Arms parlantes ("speaking arms"), more generally termed "canting arms" in which the arms are a pun, or cant, on the surname of the bearer, have sometimes been considered a "low" form of heraldry, a type of "cheap shot" unworthy of true heralds.

[Sir Thomas] Wriothesley [Garter King of Arms 1505-1534] and [Sir Christopher] Barker [garter King of Arms 1536-1550] abstained in a great measure from this practice [of granting canting arms] in the concessions of arms which were made by them; but so congenial was it with the taste of king James and the fashions which he patronised, that many bearings of this description were assumed during his frivolous reign, some of which have been subsequently confirmed to their families by the college of heralds. Some respect may be due to the few instances of high antiquity, but they should be generally considered as of easy and vulgar application, and very widely deviating from the chast[e]ness and simplicity of pure heraldry.

James Dallaway, Inquiries into the Origin and Progress of the Science of Heraldry in England, 1793, p. 275

"Easy and vulgar"? Wow, now that's a put down.  I'm not certain why Mr. Dallaway held this low opinion of armes parlantes, because they seem to me to have been pretty popular in all nations with heraldry for a very, very long time, and they are not always as easy to identify as he apparently seems to think. I'm remembering the arms of Arundel, which contain martlets, a type of swallow. You might not think that these are canting arms, until it is pointed out that the French term for swallow is hirondelle, a clear pun on the surname.

And, of course, one of my own personal favorites from here in the United States is the arms of the family of John Hancock, who wrote his name so large upon the Declaration of Independence in 1776. (The story is that he signed it so largely and clearly so that King George III could read it without his spectacles.) Mr. Hancock is buried in the Granary Burying Ground in Boston, Massachusetts, and his monument there clearly displays his canting arms of a hand and three cocks. 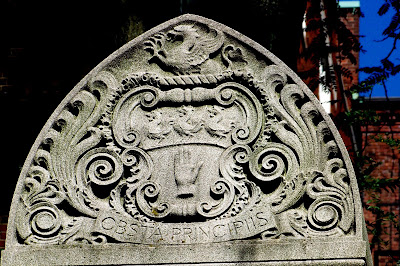 Anyway, all that is leading up to a couple of great canting arms that I found in an old Italian armorial (one of the ones I've been going through recently looking for arms which contain camels; such arms are rare, but I've found more of them than I had expected to) that I felt like I just had to share.

The first is pretty easy to figure out (a Turk for Turcha). The other falls into place when you learn that the Italian volpe means "fox." 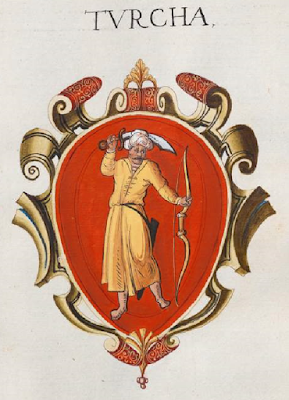 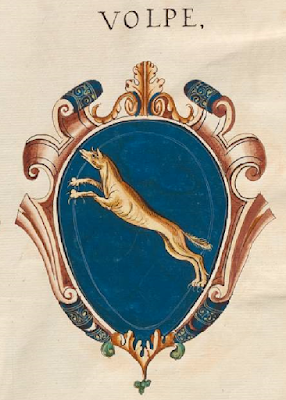 Cool, huh? Or do you, too, feel that such armes parlantes are "of easy and vulgar application, and very widely deviating from the chast[e]ness and simplicity of pure heraldry"? (Personally, I don't know much about chasteness in heraldry, especially considering some of those maiden's heads and melusines, but I can think of few things of greater simplicity than a single fox on a plain field. But what do I know?)

By the way, if you are interested in looking at some of these armorials for yourself, they can be found on the website of the Münchener DigitalisierungsZentrum Digitale Bibliothek. There is a link to this site in the "Some Good On-Line Armorials and Ordinaries" in the left-hand column of this blog.