Heraldry In My Face


Well, not literally, but still ...  I've said many times that you can find heraldry everywhere.  The other day proved that you don't even have to go looking for it; sometimes, it will find you!\

I was driving to work the other morning, sitting in stop and go rush hour (boy, is that a misnomer!), and there, right in front of me, I saw this:

Now, I know, it's not the clearest picture.  Still, even for being taken on my camera phone during a momentary stop in the traffic flow, you can make out that it is a window decal of this: 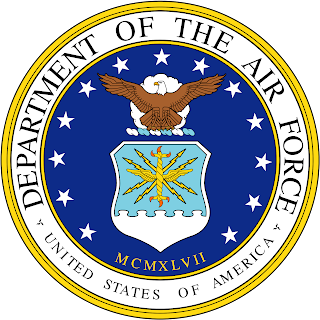 That seal, and coat of arms, of the United States Air Force, which was established as its own arm of the armed forces of the U.S. in 1947 (hence the MCMXLVII in the legend around the seal).  Prior to that time, it was the U.S. Army Air Force, a branch of the U.S. Army.

The arms themselves are symbolic of the functions of the Air Force (both offensive and defensive), a winged thunderbolt spouting flames and lightning bolts in all directions in the middle of a clear blue sky above the clouds.  (Or, in blazon, or "herald-speak:" Bleu celeste a thunderbolt or a base nebuly argent.)

Anyway, it was all pretty neat to see bright and early in the morning, and made a nice (temporary) distraction from the "creep and go" traffic on my way to work that morning.