Fortunately, with all of those pictures, we can then come home and at our leisure (or as I am often wont to say, "in my 'copious' free time," read the inscriptions and learn at least a little bit about some of these individuals and families.

One such case is the following memorial, found in St. Peter's Church in Sandwich.  (We were there because that is the church in which my 10th great-grandmother, Mary Chilton, was christened.  And let me tell you, that was a truly special feeling, to be standing there, in the same church, more than 400 years later!  But I digress....) 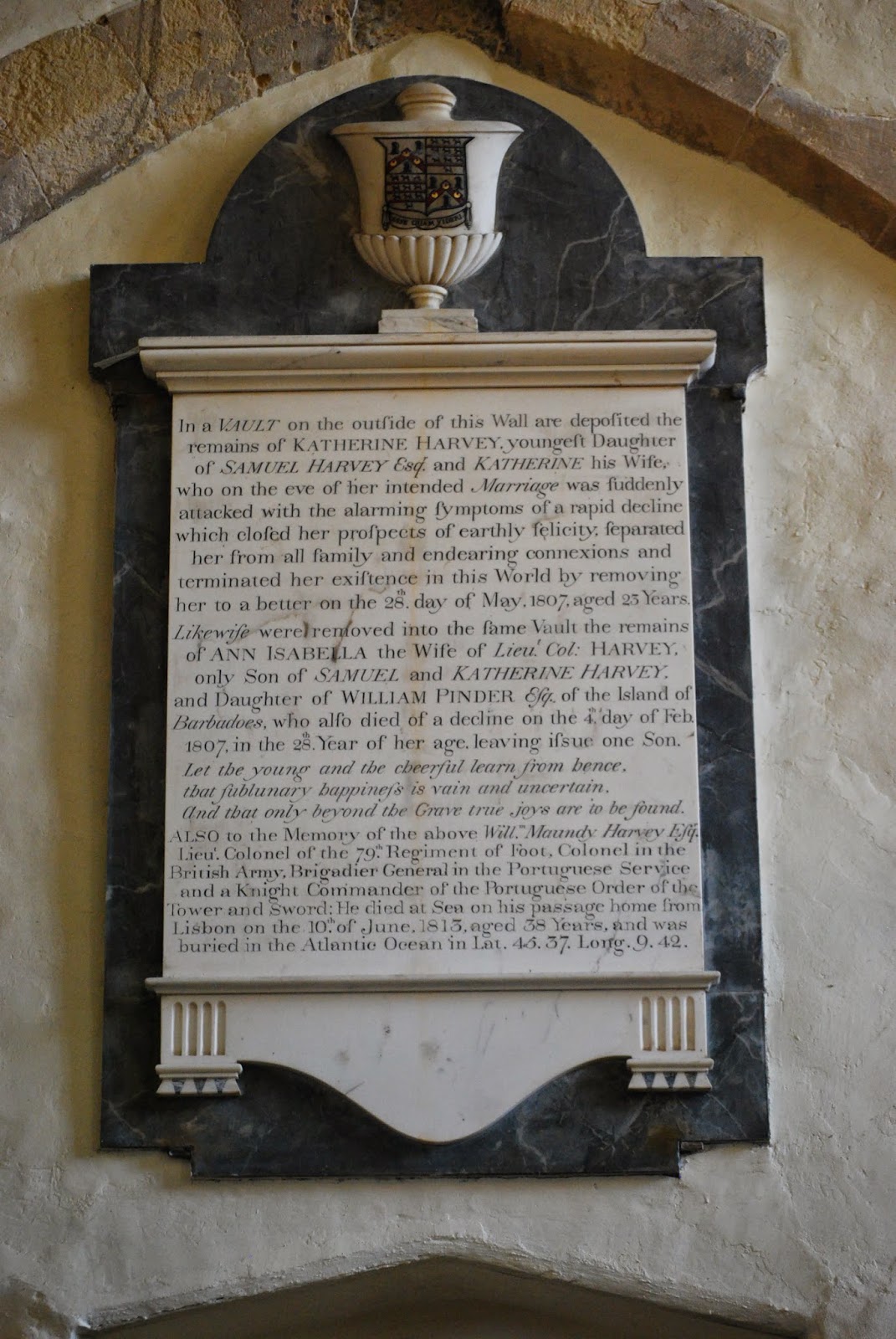 In a Vault on the outside of this wall are deposited the remains of Katherine Harvey, youngest daughter of Samuel Harvey Esq. and Katherine his Wife, who on the eve of her intended marriage was suddenly attacked with the alarming symptoms of a rapid decline which closed her prospects of earthly felicity, separated her from all family and endearing connexions and terminated her existence in this World by removing her to a better on the 28th day of May, 1807, aged 23 years.
Likewise were removed into the same vault the remains of Ann Isabella the wife of Lieut. Col. Harvey, only son of Samuel and Katherine Harvey, and daughter of William Pinder Esq. of the Island of Barbadoes, who also died of a decline on the 4th day of Feb 1807, in the 28th year of her age, leaving issue one son.
Let the young and cheerful learn from hence, that sublunary happiness is vain and uncertain, and that only beyond the Grave true joys are to be found.
ALSO to the memory of the above Willm. Maundy Harvey Esq., Lieut. Colonel of the 979th Regiment of Foot, Colonel in the British Army, Brigadier General in the Portuguese Service and a Knight Commander of the Portuguese Order of the Tower and Sword; he died at sea on his passage home from Lisbon on the 10th of June, 1815, aged 38 years, and was buried in the Atlantic Ocean in Lat. 45.37. Long.9.42.


Atop the monument is an urn with a painted coat of arms on it. 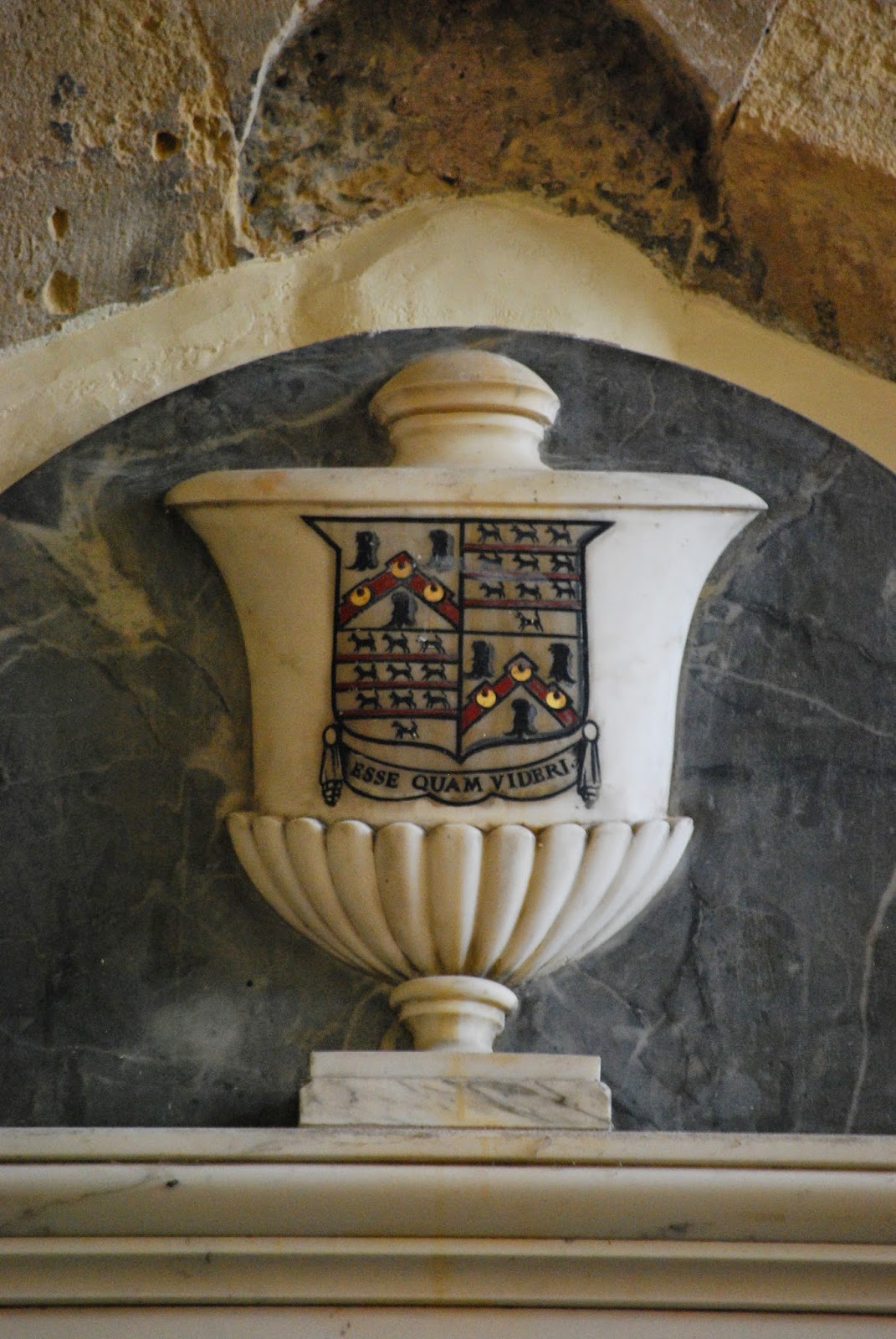 Burke's General Armory cites the arms of "Harvey (Eastry, co. Kent; descended from the Harveys, of Eythorne, settled there in the fifteenth century; from the same stock spring the Harveys, of Cowden."  Argent on a chevron embattled gules between three bear's jambes erased and erect ermines as many crescents erminois.  (Sandwich is in county Kent.)

I am not at all certain of the arms that Harvey is quartered with here.  The depiction looks something like Argent three bars per fess gules and sable between ten (cats? lions? dogs?) (statant? passant? courant?) sable.  To this point, I've had no luck identifying these quarters; but Papworth's Ordinary is not comprehensive, and it is also possible that the artist here has made one or more errors in painting the coat.  It does not seem to be Pinder, the only wife's surname mentioned on the memorial, but beyond that, I cannot say more.  Yet.