Having finished giving you the heraldic highlights from our week last August in Norway, we now move on to England, where we spent another week.  I am not planning on boring you with all of the pictures of heraldry that I took while there, nor am I planning on reproducing the ones that I do share with you in chronological order.  So expect that I’ll be skipping about London and Kent as the muse strikes me.  You have been warned!

The reasons for our stay in England were two-fold: the first was to play tourist and see some of the sights there we’ve not had the opportunity to visit before now; and the second was to visit some of the places where some of my ancestors lived and worshiped.

As a part of this latter, we spent all day Tuesday doing what I have come to call “Chasing Chiltons.”  On that day we took the train from London to Canterbury, and visited three churches in Kent where my 11th great-grandfather, James Chilton, who sailed to New England on the Mayflower, had had children baptized or buried.  We had a great time doing this, and also saw a number of really great heraldic monuments in them.

One which has caused me a bit of consternation is a large one in the tower of St. Martin’s church in Canterbury. 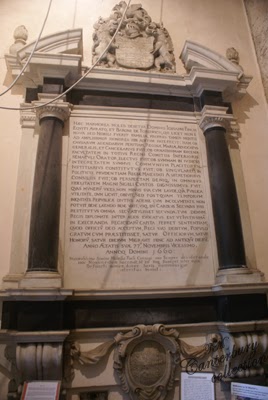 This is the monument to John Finch (1584-1660), Baron of Fordwich (1640).  It was a short-lived peerage, as he had no sons, so the peerage became extinct upon his death.  (You can see a brief biography of him and his career at http://en.wikipedia.org/wiki/John_Finch,_1st_Baron_Finch) 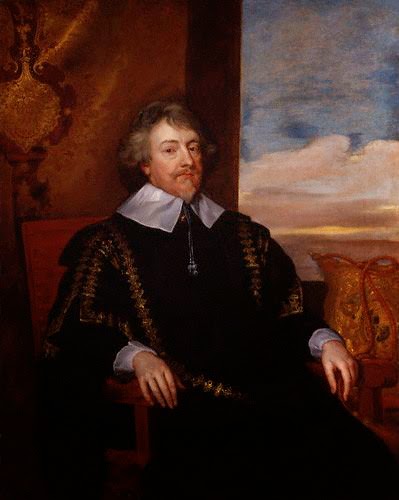 There are two coats of arms on the monument; quarterly of 20 with crest and supporters at the top of the monument, and quarterly impaling a coat at the bottom of the monument. The mystery comes in when the blazons of the arms found in Burke’s Dormant and Extinct Peerages and in Burke’s General Armory give different coats from those found on the monument.

The arms for Baron Finch, of Fordwich, Co. Kent, in Dormant and Extinct Peerages is: Azure, a chevron between three garbs or.  I have no idea where Burke got this blazon; it does not match any other Finch family I could find, the paternal arms on the monument, or the blazon of the arms in the General Armory, which are given as: Quarterly of six: 1st Finch, Argent a chevron between three griffins passant sable; 2nd, Sable a fess between three pelicans vulning themselves or; 3rd, Argent three eagles displayed in bend between two bendlets argent; 4th, Gules a fess checky argent and sable between six crosses patty fitchy argent; 5th Gules two bars ermine; 6th, Or two bendlets gules.  Crest, A griffin as in the arms.  Supporters, dexter, A pegasus argent ducally gorged wings down, the wings and collar or; sinister, A griffin sable ducally gorged or, the wings down.

The arms on the monument’s base are most probably then: Quarterly, 1 and 4, Argent a chevron between three griffins passant sable (Finch), 2 and 3, three lions rampant, two and one, impaling Gules a cross composed of nine lozenges, at each end a fleur-de-lis or (Fotherby).  The baron’s second wife was Mabel Fotherby (misspelled “Fortherby” in Dormant and Extinct Peerages), the daughter of the Very Reverend Charles Fotherby.

The arms on the top of the monument contain all six of the quarters given in the General Armory, plus another fourteen.  The crest and sinister supporter are the same as given in Burke, but the dexter supporter on the monument is a lion, not a pegasus.

So we are left with questions.  The first that comes to my mind is, where does the quarter with the three lions come from?  Papworth’s Ordinary of British Armorials cites a large number of coats consisting of a plain field and three rampant lions.  Knowing the tinctures would help us to narrow that number down, but without knowing them, the task is greater than I currently have the time to pursue.  I’m also going to go out on a limb here and state that I think the lion supporter on the monument (instead of the pegasus) may have some relationship to the quarter with the three lions rampant on it.

For the rest, it would probably be possible to eventually determine the surnames of the other quarters in the shield atop the monument, it’s really more of an academic exercise that I really don’t need to do right now.

Still and all, it was interesting to see this monument, to be able to research a bit about the life and times of John Finch, Baron of Fordwich, and to be reminded once again that heraldry is by no means an exact science, where – to use this example – we have two different renditions of the arms (in a single monument!), and two different blazons of the arms, none of which match.

Isn’t this fun?  I am reminded of something that J.P. Brooke-Little once wrote, in the Introduction to his An Heraldic Alphabet: "You can study heraldry until you are azure ... in the face but inevitably discover, from time to time, that you really are quite vert.... I have found this over and over again but, never forget, herein lies the fun and if heraldry ever ceases to be fun - chuck it."