On our first full day in London last August, we had gone by the Houses of Parliament and alongside Westminster Abbey on our way to visit St. Margaret's Church (where members of another branch of the family tree had been christened, married, and buried).  Following that, we headed eastward to see what we could see.  After crossing the Thames at the Lambeth Bridge, we saw a sign that said "Cafe" and went into the Garden Museum, housed in what was formerly the parish church at St. Mary-of-Lambeth.  Following a nice sit down lunch, we looked at the heraldry still on the walls of the former church and then went out to see their garden.  Where we unexpectedly ran across the final resting place of a man known to us, though (sadly) mostly through his portrayal in movies by Charles Laughton and Trevor Howard: 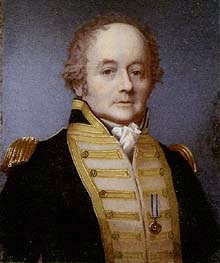 Vice Admiral of the Blue William Bligh, once Commanding Lieutenant of HM Armed Vessel Bounty, of "Mutiny on the Bounty" fame. 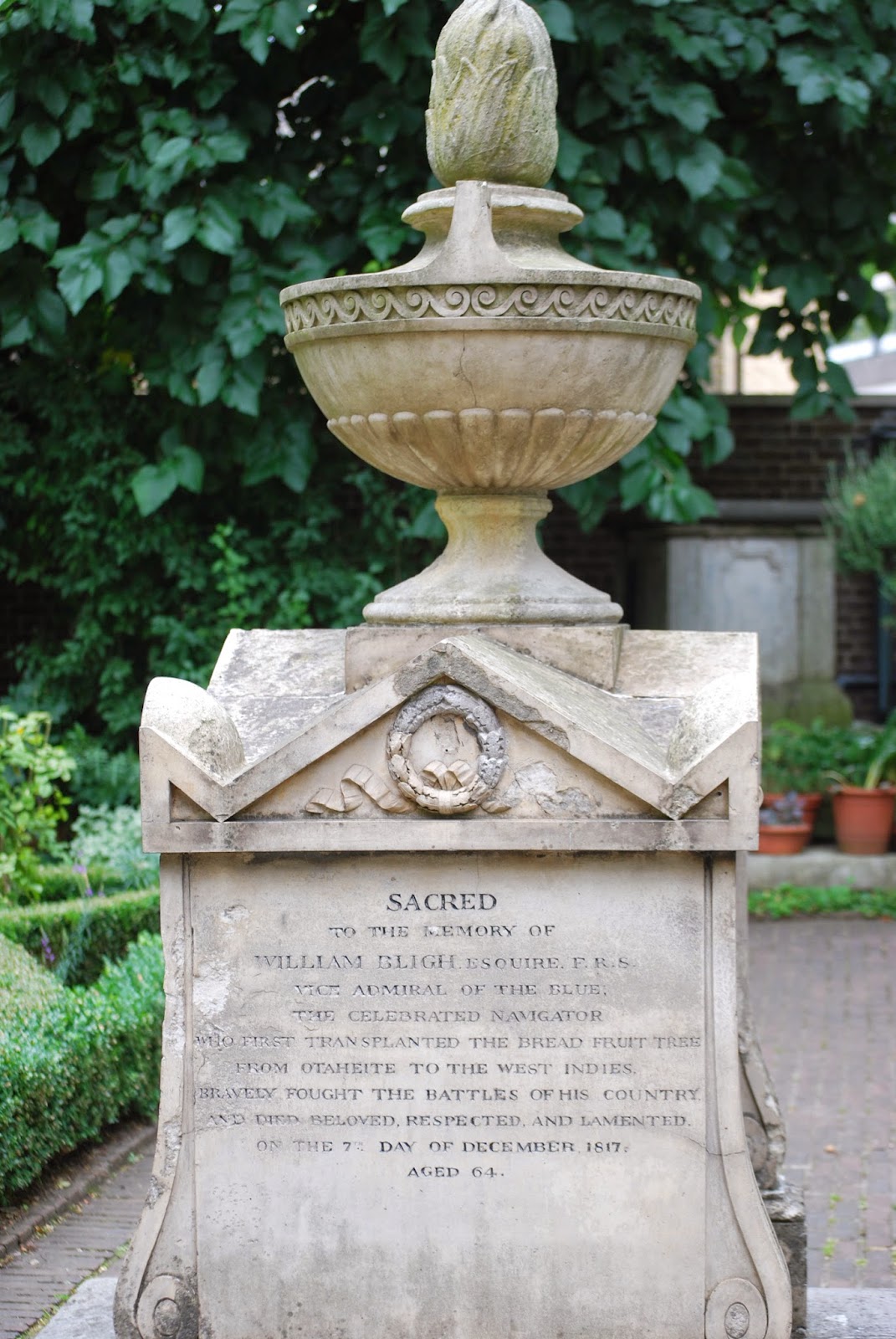 He is buried there along with his wife, Elizabeth nee Betham, along with two of their sons (they had six children) and one of their grandsons. 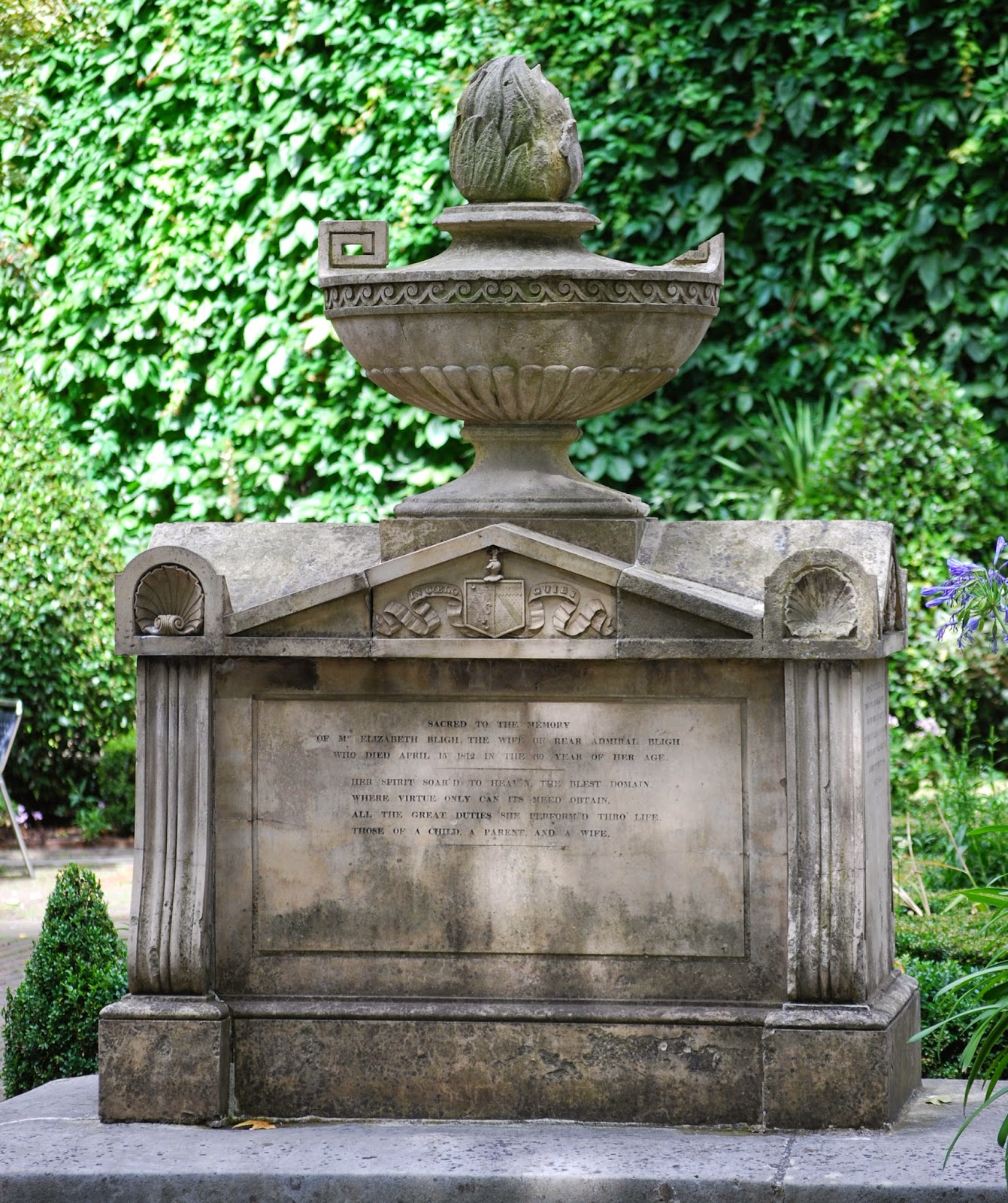 Perhaps not so entirely unexpected is that the finial atop the tomb is a breadfruit (the reason for the voyage of the Bounty was to transplant breadfruit plants from Tahiti to the West Indies in the Caribbean; a later voyage with Bligh as master and commander of HMS Providence was successful in doing so).  Nor is is surprising that the tomb contains the marshaled arms of Bligh and Betham: 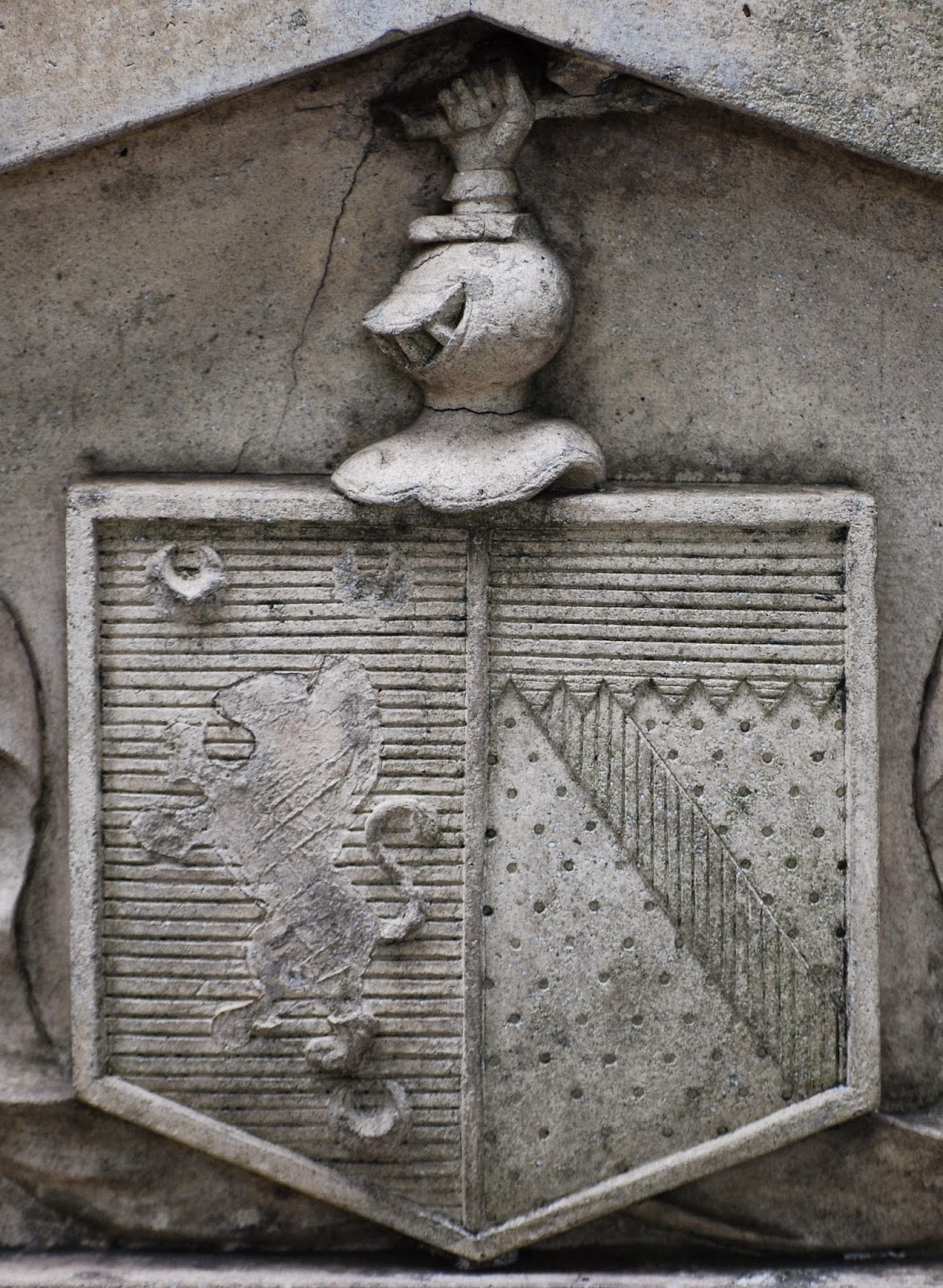 Bligh: Azure a griffin segreant or armed and langued gules between three crescents argent.  Betham: Or a chief indented azure and bend gules.  (Well, that's the way the blazon appears in Burke; I would have expected a blazon that placed the bend first, but I can see where that might lead to confusion about whether the bend also was indented.  Blazoning the chief first eliminates that potential muddle.)  The crest is A (gloved? armored?) hand holding a battle-axe.

The inscriptions around the sides and end of the tomb read:

Sacred to the Memory of William Bligh, Esquire, E.R.S. Vice Admiral of the Blue. The celebrated navigator who first transplanted the bread fruit tree from Otaheite to the West Indies. Bravely fought the battles of his country, and died beloved, respected, and lamented on the 7th day of December 1817, aged 64.

Sacred to the memory of Mrs. Elizabeth Bligh, wife of Rear Admiral Bligh, who died April 15th, 1812 in the 60th year of her age. Her spirit soar'd to Heav'n, the Blest Domain, where virtue only can its meed obtain. All the great duties she perform'd thro' life, those of a child, a parent and a wife.

In this vault are deposited also the remains of William Bligh and Henry Bligh who died March 21, 1794 aged 1 day.  The sons of M. Elizabeth and Rear Admiral Bligh; and also William Bligh Barker, their grandchild, who died Oct 22, 1805, aged 3 years.

All in all it was a great, and totally unexpected, historic and heraldic find.  And all because we wanted to stop for lunch, never suspecting that we were going to come face to face with Captain Bligh of the Bounty.