The final design for the tomb of Richard III was shown to the public last week.  The biggest change that I can see to the design is that instead of the stark monument (a large rectangular stone with a deeply-incised cross in it) will now sit atop a slab of black Kilkenny marble inscribed with the king's name, dates, motto, and the Royal arms as used in Richard's time (Quarterly France modern and England), instead of being placed over a large depiction of the white rose of York. 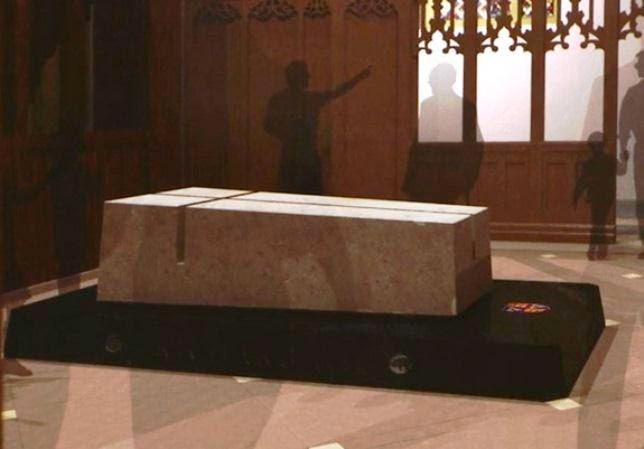 Richard's bones, rediscovered in 2012 under a car park in the city of Leicester, will be reinterred inside a lead ossuary placed inside a wooden coffin sealed in a tomb made of Swaledale fossil stone in Leicester Cathedral.  The wooden coffin will be made by Michael Ibsen, a descendant to Richard's sister, Anne of York.  (How cool is that!)

There had been some, um, "discussion," and a lawsuit, to have Richard interred in his adopted home town of York.  But the court said Leicester had a valid exhumation license and could reinter his remains near where he was originally buried following his death at the Battle of Bosworth.

The current plans are to rebury Richard III in the spring of 2015.

You can read more of the story on-line at the website of NBC News at http://www.nbcnews.com/science/science-news/final-design-king-richard-iiis-tomb-unveiled-n134706, or at that of the Leicester Mercury at http://www.leicestermercury.co.uk/Richard-III-Final-tomb-design-revealed/story-21243145-detail/story.html, or, of course, that of the BBC at http://www.bbc.com/news/uk-england-leicestershire-27865860