In a recent (April 9, 2013) news article, kentnews.co.uk noted the display in the Natural History Museum in London of the first substantially complete dinosaur skeleton to be unearthed anywhere in the world. Found in Maidstone, Kent, England, the skeleton of the plant-eating iguanodon, so-named because its teeth resemble those of an iguana, was originally recognised in 1834 by a man named Gideon Mantell. 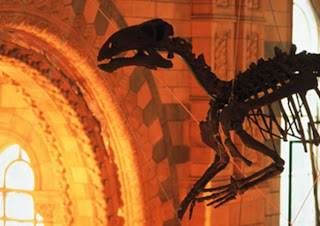 The correct name for the skeleton is now mantellisaurus named, obviously, after its discoverer.
Maidstone requested an iguanodon be incorporated in its civic coat of arms in 1946. The request was granted in 1949 and the College of Arms proclaimed: “I, the said Garter Principal King of Arms, do by these presents further grant and assign to the Borough of Maidstone the Supporters following, that is to say: on the dexter side an Iguanodon proper Collared Gules suspended therefrom by a chain or a scroll of Parchment....” 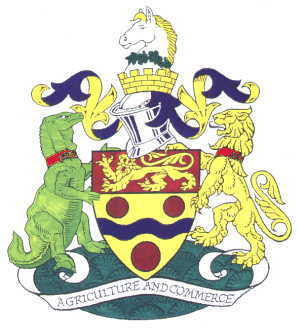 How they know what the proper coloration for an extinct sauropod (apparently, it's green) is, I don’t have a clue. On the other hand, the College of Arms has in the past defined “proper” tinctures for such mythical creatures as a phoenix and a griffin, so why not an iguanodon?
The full article can be found on-line at: http://www.kentnews.co.uk/leisure/crowds_continue_to_visit_natural_history_museum_s_maidstone_dinosaur_1_2009315