In an article The Canberra Times, Dr. Hatice Sitki, a "national myths and symbols consultant," recommends changing the City of Canberra’s coat of arms to have it more closely reflect the city’s multicultural identity.  She recommends beginning by moving the yellow box gum tree (currently hiding behind the portcullis in the crest) to somewhere more prominent.  She feels the current coat of arms, designed by C.R. Wylie in 1928, represents the then newly-formed city's perceived national identity: white, British, monarchical, and European; making it mono-cultural rather than inclusive and/or multicultural. 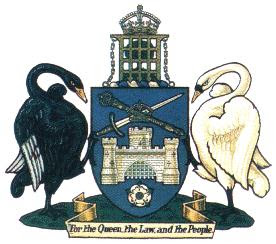 Wylie wrote to the Sydney Morning Herald explaining the reasons he chose these European/British symbols to be the external identity of the city. He explained why he had rejected other Australian symbols as “being too bellicose; kookaburras, lyre birds, parrots, goannas, mopokes, and platypuses all lacked dignity; kangaroos and emus had been ruled out as overdone, and there seemed to be too little left of Australia's fauna...”  Dr. Sitki feels that the city was let down by Wylie, who thought the coat of arms had to appear ''British'' to be able to gain approval.  (Well, yeah, since approval had to come from the College of Arms in London!)

The full article, with even more background and further arguments by Dr. Sitki for changing the city’s coat of arms can be found at http://www.canberratimes.com.au/comment/time-to-celebrate-citys-multicultural-identity-20130224-2ezra.html