Heraldry in the Blogosphere!


In a February 27, 2013 post over at the blog First Things, Tristyn K. Bloom asks (and answers) the question, was “Hugh Hefner Inspired by Fifteenth-Century Prayer Book”?

The answer is, of course, “probably not,” but the juxtaposition of the arms of Hastings (from the Hastings Hours in the British Library) and the logo of Playboy, Inc. are striking. 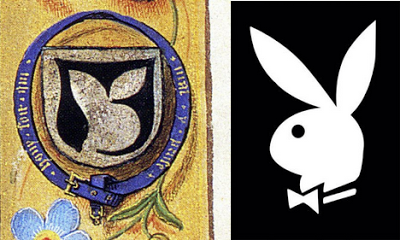 The coat of arms of Hastings is Argent a maunch sable.  A maunch is a stylized medieval sleeve from a dress ("severed at the shoulder" according to J.P. Brooke-Little's An Heraldic Alphabet); the way it frames the central part of the white shield looks remarkably like the white bunny head on black that is the Playboy logo.

I don’t know about you, but I may never be able to look at a maunch quite the same way ever again.