In this case, it's a matter of Tee Fury (which has a new tee shirt design every day offered at http://www.teefury.com/, just as Woot Shirt! does) going for weeks at a time without an heraldic design, and then -- poof! -- here comes one, hot on the heels, as it were, of the one the other day from Woot Shirt! 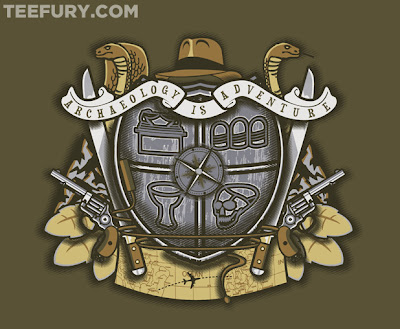 In any case, this most recent offering of heraldry (of a sort) is entitled Adventurer's Crest, and is an homage to that intrepid cinematic archaeologist, Dr. Henry Walton Jones, Jr., better known as "Indiana Jones."

The coat of arms has four quarters, each containing a key item from one of the four Indiana Jones movies: in the first quarter, the Ark of the Covenant; in the second quarter, the three sivalinga stones central to the story line; in the third quarter, the Holy Grail; and in the fourth, a crystal skull.  All along with machetes, revolvers, his trusty bullwhip, and topped, of course, with his trademark fedora.

All in all, it's a pretty interesting tee shirt design (however much it might not be considered to be good heraldry!), and it's just the thing for the heraldry enthusiast who is also an Indiana Jones fan.
Posted by David B. Appleton at 6:00 AM