Heraldry In and Around Dallas, Texas (circa 1996)

I recently had to acquire a new desktop computer. (Well, technically, I didn’t have to, but since I’d filled up 99% of the hard drive on the desktop that I had, it made working on it a bit “iffy” sometimes.) And, of course, since I have to work in a Windows environment at my job, I pretty much had to get a computer with a Windows operating system. Windows 7, unfortunately. Which is what created the problem for me. The old PC ran Windows XP, and not all of the programs that I used on it would run on the new Win7 machine. Programs that I’ve been using for years now. Some programs which I’ve been using since at least the PC before the PC I’m replacing now. (Change may be said to be good, but it is also a pain in the patoot!)

One of the programs that wouldn’t even install, much less run, on the new PC was a proprietary photo-editing program that I’ve used since well before switching to a digital camera a few years ago. I’d take pictures, mail the film off to them, and they’d send me back photos and/or slides and a disk with digital copies of all the photos that I could play around (crop, adjust, etc.) with in their software. Needless to say, I had several folders worth of photos that I couldn’t just transfer from the old PC to the new one, since the proprietary software wouldn’t load there. So I went through those folders and converted the pictures in them to .jpg’s so that I could open them on the new PC and not just lose them because of the upgrade.

Several of the folders contained photographs of heraldry I’d taken in and around Dallas, Texas from which I pulled examples to use in a presentation that I gave at the International Congress of Genealogical and Heraldic Sciences in Turin, Italy in 1998. (A copy of that presentation can be found on-line at: http://www.appletonstudios.com/Congress1998DBA.pdf) Converting all of those photos, many of which I didn’t use in the presentation, made me realize once again how much heraldry I can see around me every day. So I thought I’d take some of those photos and share them with you. Some of them are the arms or logos of companies which have changed them since 1998, or which have closed or gone out of business since then, but they remain interesting as examples of how heraldry has been used here in the United States. 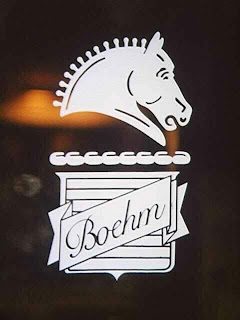 The first heraldic logo I’m going to share is that of the Boehm Porcelain Gallery, since closed, which had been located in The Crescent office and retail complex on the north side of downtown Dallas. I have no idea where the arms come from originally (they do not appear under “Boehm” in either Rietstap’s Armorial Général or Burke’s General Armory). They do, I think, present a pretty “classy” image, despite the fact that the “crest” is facing to sinister, the “torse” has eight instead of the usual six twists, and the scroll (in bend sinister) overlies the shield in a way that no true heraldry does.
Posted by David B. Appleton at 6:00 AM