A few pages further along in Mr. Punch's Book of Arms we come across the "arms" of Welsh-born American journalist and explorer "Viscount Stanley of the Congo."  (You can find out a lot more about the real Sir Henry Morton Stanley on-line at http://en.wikipedia.org/wiki/Henry_Morton_Stanley) 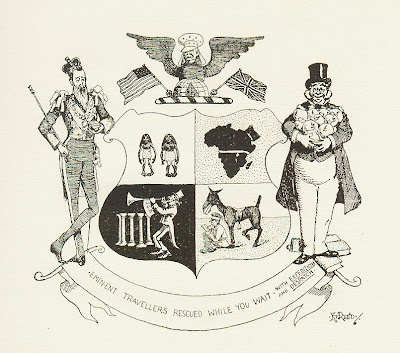 The arms are blazoned in the book as follows:

Arms: Quarterly, i, two dwarfs of the forest of perpetual night proper, journalistically exploited to the nines, ii, a continent sable, crossed by a small white band issuant from the interior, iii, a New York herald blowing a trumpet of his own in exultation over repeated columns of copy sensational to the last, iv, a missionary of renown discovered in solitude near U-jiji sable.  Crest: Out of a demi-terrestrial globe "southern hemisphere" a spread-eagle proper emergent in his glory gorged with honorary degrees "south latitude", bearing in dexter claw an American flag, in sinister an union-jack. Supporters: Dexter, A neutral monarch crowned, sceptred, and habited proper in a can't-go-free state, Sinister, A publisher radiant charged in the arms with a colossal profit on the books of the present viscount.  Second Motto, "Mr. Speaker, I presume?" on very rare occasions.
Posted by David B. Appleton at 6:00 AM