You Can Find Heraldry Anywhere!

It’s always interesting to me to see how different artists will incorporate heraldry into a design, for whatever purpose. In a recent foray to an antique mall, I ran across a book whose cover incorporated some heraldry (Russian), with some twists to it (the two faces instead of the escutcheon of St. George slaying the dragon, and the eagle’s legs turned into human arms, one holding a pistol and the other a hand grenade, instead of the more usual scepter and orb). 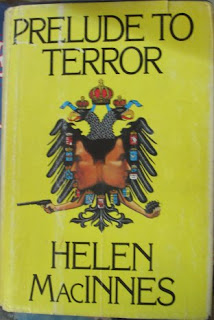 The novel, Prelude to Terror by Helen MacInnes, is a late (1978; she began publishing back in 1941, during WWII) work of hers which focuses on the money trail leading from the old enemies of the west (Nazi Germany, and later the Soviet Union and its satellite nations) to the new enemies of the west, international terrorists. I don’t care so much about that part of it - it seems to be yet another entry in the genre which can be broadly defined as the “spy thriller” - but the use of the heraldry on the cover was what really caught my eye, and which I thought was worth sharing with you.

And that use, found in an antique mall, incidentally served to further support a long-standing belief of mine, which is that "You can find heraldry anywhere."
Posted by David B. Appleton at 6:00 AM